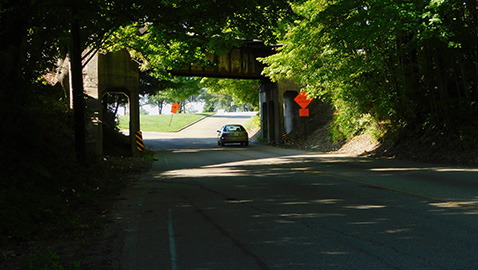 Many people use Old Broadway in Fountain City and those who do might want to check out the city’s plans for sidewalks there. Kristin Finley, the mayor’s communications director, said, “Once the project is complete there will be a sidewalk/greenway connection, along Old Broadway from the north end near Starbucks through the intersection with Mineral Springs Avenue.”

The railroad bridge was built in 1928 and shows signs of many years of aging.

Asked about walking or biking access at the railroad bridge, she said, “I was told Norfolk Southern installed a wider, at-grade pedestrian crossing over the tracks on “Old” Old Broadway so this project will create a sidewalk connection to that crossing.”

Old-Old Broadway leaves the street just north of the bridge, climbs the hill, and runs along the railroad track there. Currently anyone walking or riding a bicycle there must get into the street which, under the bridge, is too narrow for two cars to pass safely.

“I am being told this project will not rework the sidewalks beneath the railroad overpass, at this time,” Farley told The Focus.

Councilman Charles Thomas, the District Five representative of the area, has asked for a two-week postponement of the sidewalk vote. He has invited The Focus to walk the planned route with him.

He served as the councilman several years ago and said that at that time he was pushing for a sidewalk there with the idea of the walk going under the railroad bridge. Thomas noted that the plans were changed when Council members Lauren Rider and Mark Campen walked the street. He also said he was not aware the sidewalk plans had been changed.

“I just want the public to know what’s going on,” he said.

The resolution, which comes back to council on the 28th calls for increasing a contract for work on Old Broadway by $27,400, making the current cost $337,700, and extending the date of completion  until December 31st.