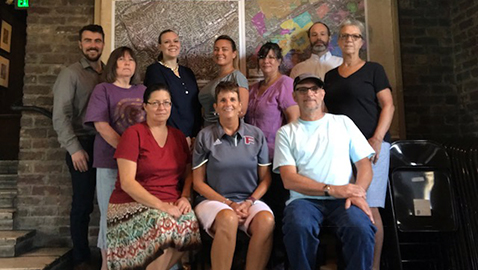 There’s a new concept being discussed in North Knoxville, one that is catchy and descriptive, and certain to become very popular.

“UpTown North” is a brand being introduced to neighborhoods in the North Knoxville area with boundaries extending from I-40 at I-275 to the I-640 interchange and Whittle Springs Road on the east.  The UpTown North branding committee is working to fill the need to define the unique character of this diverse and historic area.

The vision of UpTown North is to promote North Knoxville as an attractive, diverse, commercially successful, family-friendly and safe community that values its history.

“Fulton is the heartbeat of North Knoxville and would be the center of this campaign,” Bove said.

“We really need to identify North Knoxville as a distinct area from other neighborhoods such as downtown Knoxville and Fountain City and are talking with neighborhood groups about adopting the ‘UpTown North‘ idea.  We would like to see this brand become an umbrella for this en-tire area.  We are looking to create a destination,” Bove said.

“There were several good ideas for a name but ‘UpTown North’ was the name chosen because it best captured the intent of the committee.”

Rickman said a logo and branding materials are being created.  A subcommittee is working with Fulton High School Digital Design students and instructor to create a logo and promotional bro-chure.  Bryan Hill, a member of UpTown North, has created a map to show the UpTown North boundaries which include features such as neighborhoods, businesses, schools, and parks.

“Our first meeting was early last fall following a NKBPA meeting with about six people and we now have 19 members and our group continues to grow.  It’s really exciting to see the momentum of this group and the shared vision for promoting UpTown North,” Rickman said.

Kyle Ann Lang, co-chair of the Broadway Corridor Task Force and member of the UpTown North committee, said, “We are proud of our community and want to show others that this a desirable place to live.  We have highly rated schools, homes with a wide range of price and styles, quiet streets, nearby shopping and great access to downtown and the interstate systems.”

“The UpTown North committee includes members from at least five neighborhood associations, members of the Broadway Corridor Task Force, local business professionals including Garry Tener, COO of Broadway Carpets, and local government representative Anne Wallace, the city’s deputy director of redevelopment,” Rickman said.  “Wouldn’t it be great to see the UpTown North logo on signs, banners on the light poles and other promotional items to recognize and brand UpTown North?”

Rickman and Wallace are currently working with committee members to create a proposal that will be made to the city for recognition, signage and campaign.

The UpTown North committee meets monthly at the Oakwood-Lincoln Park Clubhouse, 916 Shamrock Ave.  Meetings take place the third Thursday of each month at 8:00 a.m.  The next meeting is August 16.  Anyone interested in learning more and/or becoming a member of the committee is encouraged to attend or email uptownnorth37917@gmail.com.