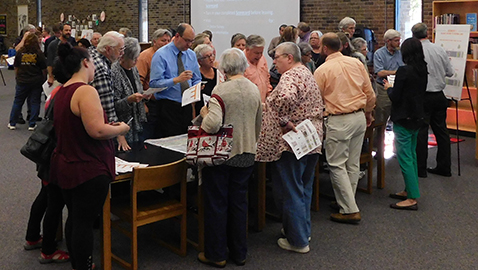 The Knoxville Focus has asked the candidates for Knoxville City Mayor to comment on whether or not the James White Parkway should be considered for extension through the Urban Wilderness in South Knoxville.

Mayor Madeline Rogero worked with the state to get part of the terminus of the Parkway donated to the city and, last month, delivered her State of the City budget address there. Some residents who live near Chapman Highway are pushing for the extension of the parkway to be reconsidered in order to take some traffic off of their busy route.

The city is considering expanding trolley service to some parts of South Knoxville and the state is in the middle of a multi-million dollar improvement project on Chapman.

The proposed Urban Wilderness Gateway Park will be at the end of the James White Parkway. Some Chapman Highway area residents want the parkway project recreated and completed so it will take some traffic off their busy highway. Others see a completed parkway as unnecessary and want the wilderness in South Knoxville to go untouched except for bike and hiking trails.

Candidates were given the same statement to comment on and replies are listed in the order in which they were received.

As you know there are some resident who live off Chapman Highway who are pushing for the city to agree to complete the James White Parkway through the Urban Wilderness. The idea is to take some traffic off of Chapman.

We are wondering if you’d like to address that and whether or not you may continue the Urban Wilderness project or consider working with the state to reconsider extending the parkway.

I am 100% in support of the Urban Wilderness and all the health, economic and environmental benefits it generates. I also support safety improvements to Chapman Highway, chiefly design changes to slow traffic down.

Speeding, impaired driving and lack of well-designed turn lanes seem to be the crux of the problem, more than congestion. Traffic deaths are preventable. Working together we can eliminate fatal accidents on Chapman Highway and throughout Knoxville.

I am opposed to any extension of the James White Parkway. I am fully supportive of making Chapman Highway safer, but I do not believe that building another road would achieve this.

Early in Mayor Rogero’s administration, as COO and deputy mayor, I participated in conversations with the commissioner of TDOT on the future of James White Parkway.  For some time, I was in hopes that we would be able to reach a compromise that would allow us to extend JWP but also preserve the incredible Urban Wilderness.  It became more obvious, as time went on, that more than likely that wasn’t going to be an option.   Today, it’s very obvious that we have moved past this conversation and need to look at other options.  Considering this, I am in total support of the continued development of the Urban Wilderness project.

I would like for us to review all other options, understanding that the proposed improvements to Chapman Highway would be one of these options, but I would also like to see us consider serious conversations with TDOT and the county and investigate any other alternative routes that could help alleviate the danger and congestion of Chapman Highway.

I understand that this is a very sensitive and emotional topic to many, including some of my dear friends.  My primary focus will be to move forward, as quickly as possible, to review all possibilities before another innocent life is lost.

Easing Chapman and making it safer is a top priority for our city and ideally I think there are a lot of viable options for alternate routes and to ease the traffic along Chapman.

If I were to propose an extension to James White, I would love to see an elevated parkway like the Blue Ridge Parkway or Natchez Trace. It would keep the juxtaposition of nature and city which I believe is what our city is. We are a place you can be in the middle of downtown and five minutes away be somewhere like Ijams. This would also get people to see one of the most gorgeous views of our home. Seeing the river meander through the city with the sun setting behind it would make anyone want to stop by and support our local economy.

I also believe we have alternate routes we could utilize like Alcoa to John Sevier to ease some of the traffic flow on along Chapman Hwy as well.