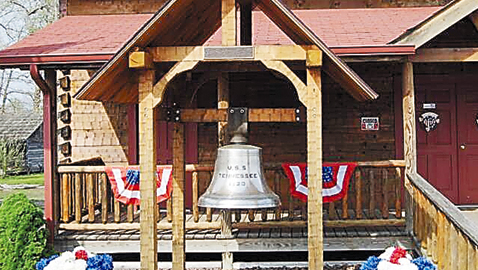 The USS Tennessee floated along Battleship Row, next to the Arizona and the West Virginia, in Pearl Harbor when the Japanese attacked. The ship was struck twice by bombs as its crew fought back. But she stayed afloat.

After repairs and upgrades the USS Tennessee served out the rest of World War II seeing action in the South Pacific. After the war, in 1947, the ship was decommissioned and was inactive until, in 1959, her name was taken off the naval register and she was sold to the Bethlehem Steel Company for scrapping.

On Tuesday, May 18th, eight of the estimated 18 to 20 survivors will arrive in Knoxville, spend the night and on Wednesday travel to Huntsville in Scott County to take part in the final reunion of the ship’s crew.

A lot of fanfare will happen at the Scott County History Museum, and some of those attending will be the East Tennessee Sea Cadets.

“The cadets, from high schools across the region, will be in uniform. Although we’re not officially taking part I want them to experience the event as audience members,” said retired Navy Chief Todd Johnson. He explained that the Sea Cadets are separate from the Junior ROTC and meet one weekend a month.

“On the 21st we will be having a dinner and Appreciation Awards at 6 p.m. featuring the cadets, the Color Guard, and we will be promoting one of the students to Cadet Chief. It’s for cadets and members of their families,” Chief Johnson told The Focus. The dinner will be at the Naval Reserve Center on Alcoa Highway.

The USS Tennessee Reunion will feature the Volunteer State Honor Guard and Scott County Sessions Judge Jamie Cotton will speak. Local and regional veterans and the region’s congressmen have been invited to attend.

How did a memorial to the USS Tennessee end up in Huntsville?

The ship’s museum is part of the Scott County Museum, which was built without taxpayer dollars by high school students there. The Museum also features exhibits of local history in three museums and has 14 buildings on 3.5 acres according to Gary Sexton. Sexton is a high school teacher and museum director.

The connection with the USS Tennessee started when Senator Howard Baker, a Scott County native, suggested that the ship’s bell, which was in Nashville, be moved to his home town. The bell went to the courthouse there and then to the county museum at Scott County High School.

“The USS Tennessee Museum and collection was originally outside Columbus, Ohio. Mr. and Mrs. Paul Dawson wanted to move it to Nashville but there was no room there. Dawson saw our museum on the internet and learned that the ship’s bell was now in Huntsville,” Sexton said.

“He said that if we built (a place) for his items he’d move the museum here,” the director explained.

“We started in 2003 and it opened in 2005. The grand opening was that year and more than 100 survivors and their families attended,” he said.

The Tennessee was unique. It was launched in 1919 and it held 57 officers and more than 1,000 enlisted sailors. Eighty-five percent of the men were Tennesseans in a program the Navy introduced to promote harmony.

“In our 2005 anniversary the oldest Tennessee survivor was 94 and the youngest was 76 years old,” Sexton said.

The museum holds the largest collection of USS Tennessee artifacts in the world. Aside from the ship’s bell the museum also has a 5-foot model of the ship built by the Navy in 1943, a 6.5-foot model built by local historian Cliff Simmons, a large collection that includes thousands of artifacts.

The event takes place during the National Armed Forces Week and ceremonies begin at noon. The Scott County High School and Museum is located on Scott High School Drive, just off Highway 295 west of downtown Huntsville. Highway 249 is at the Royal Blue exit on Interstate 75 north of Caryville.