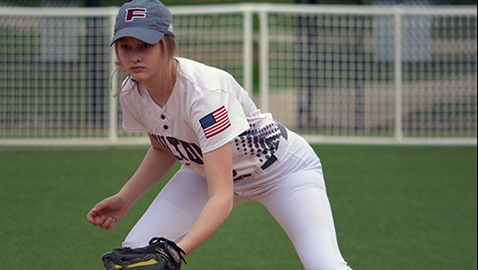 It’s been said often that the best time of one’s life are the high school years.

Cassie Vaughn wanted to make the most of her high school career at Fulton and she has succeeded through sports and more.

As an athlete, her achievements are not measured in championships, but in participation.

Remarkably, the Lady Falcon senior has played six different sports in 16 seasons over the past 3½ years.

Like many other high school athletes, Cassie missed out on some playing time because of the pandemic. First, her softball season was drastically shortened last spring.

And this school year, she said, “Our volleyball team had to stop practicing for a week or so during the season due to COVID-19 related issues. I also was in quarantine right before Christmas break and it caused me to miss a wrestling match.”

Other than that, her prep career has been packed full.

In the fall sports, Cassie was on the volleyball team – her best sport – all four years; she played golf every year except when she was a freshman; and she helped out in soccer as a senior when that team was short on players.

In the winter months, she played basketball as a freshman and sophomore and then replaced that sport with wrestling as a junior and senior.

In the spring sports, she will be going into her fourth softball season in March and – believe it or not – is considering adding tennis or track before her time at FHS ends.

After imagining what all of that was like, you are welcome to take a deep breath and exhale. Whew!

“Honestly, I never thought I would be playing six sports in high school,” said Vaughn after coming home after wrestling practice and a stop at the Emerald Youth Foundation Volleyball Club one night last week. “In reality I shocked a lot of peers and teachers along with myself.

“I played so many because I love being active and I’m a very competitive person. I also wanted to feel like I made the most of my high school years and playing all of these sports was my way of thinking I accomplished so much within high school.”

The “F” on her maroon letter jacket is a symbol of her dedication and participation. It will be full when her soccer emblem is put in the last empty space.

“Cassie is a natural athlete who is able to seamlessly transition from one sport to another,” said Jody Wright, Assistant Principal and the school’s Athletic Director. “She has two brothers that play football and wrestle and they are all active and involved in many activities.

“Cassie can play just about anything she puts her mind to. She has a skill set that just allows her to flow from one sport to another. In today’s world of sport specialization, she is a throwback to the good ole days when the multi-sport athlete was the rule, not the exception.”

Vaughn says she is glad with what she has done. “I never once regretted it.”

It made her happy and gave her a joyful feeling on the inside. “Without sports I feel like I’d be an empty person due to my life always being centered on God, school and sports.”

She is very proud, too. “I plan to make it seven or eight by maybe doing track or tennis to add to the list!”

Never mind she already has a pretty full letterman jacket. That won’t stop her.

Vaughn stuck with volleyball from start to finish, despite having four different coaches.

Cassie said her most challenging sports were golf and wrestling. “Both being a single-person sport, all you have to depend on is yourself and that was a different eye opener for me.”

Her favorite memories surprisingly come from her time playing soccer – the sport she actually played the least.

“I had never played a day in my life and the team was down some players so I joined them,” she recalled. “One of my very close friends, Abby Diggs, was trying to tell me how to play during the game … She was coaching me and without her I probably would have been lost.”

Still, Cassie said she “enjoyed every minute of it” and the experience made for a lasting memory, plus gave her another sport to add to her list.

Fulton High has already named its senior superlatives for 2020-21 and you-know-who earned “Most Athletic.”

Vaughn plans to go to college and study sports medicine.

Triplets! And playing with her brothers

Cassie was born on March 7, 2003 along with her two brothers, Seth and Keenan.

She was the first of the three to arrive at UT Hospital to her proud parents Betty and Sammy.

“Growing up, I didn’t really do girly things,” recalled Cassie. “I was into sports and always hung around my brothers and fought with them. I wasn’t the typical young girl that played with dolls.

“We played sports around the house growing up and my favorite would probably have to be throwing football. I might not could catch as good as them but I loved throwing and catching the football with them.

“I gained a lot by playing with my brothers. Me being the only girl, I have had to stick my ground and be tough around them and that really helped me become a physical person and pushed me to be stronger.”

Trying ballet to karate growing up

Cassie got interested in sports at a very young age when her dad put her in sports as soon as she was old enough.

“I was 4 when I was put into my first sport and it was Wee- ball, which was played before Tee-ball,” she remembered. “I was 7 when I did ballet.”

“I was picked up on a recreation basketball team all the way up until I started playing middle school basketball in the 7th grade,” she said.

Focusing on her other interests at FHS

Friday nights in the fall found Cassie being a part of Fulton teacher Steve Morrell’s photography team and shooting photos of the Falcon footballers for Ful.com.

“My other interest outside of sports would probably have to be photography,” said Cassie. “I take pictures during sporting events such as football and basketball games. I have even gotten the chance to take pictures for The Knoxville Focus.”

Cassie found herself on the other end of the camera when she was “Junior Princess” on the Homecoming Court her junior year.

“My favorite subject,” she said, “would probably have to be Audio Radio Production with Russell Mayes, the voice of the Falcons!”

Mayes responded with a high compliment for his pupil: “I think any school in America would love to have Cassie as a student, and we are blessed to have her here at Fulton. In addition to being a good student, she is always willing to participate and help with our sports and extracurricular activities. She is a tremendous asset to Fulton High School!”

In addition to the Photography Club, she’s also a member of the Fellowship of Christian Athletes and the National Honor Society.

Cassie has a close-knit and supportive family.

“Me and my brothers all grew up playing the same sports and being on the same team while my dad was coaching us, so in a way they were a part of (my success in high school) because we all did it together,” she said.

“My dad contributed to my love for sports because he would always push me to do better or would work with me on his days off so that I could be the best at what I do.”

Cassie’s mom, Betty, didn’t play sports in high school, but she has backed her daughter every step of the way.

“My mom is one of the most supportive people you could ever think of,” said Cassie. “Any sport or opportunity I have gone through, my mom has always been 10 toes behind me in support and that’s something that everyone doesn’t always get to have. I’m very thankful for my mom and her loving support.”

Cassie added that her parents have never missed any of her or her brothers’ matches or games. “There has always been one of them or both of them there.”

Cassie also spoke of her brothers’ support. “I have grown up the only girl and it has always been me and my brothers, Keenan and Seth. “Without them I wouldn’t be who I am today and they really push me to be a better person. I love them like no other and I thank God each day for them.

“I also would like to thank God for giving me the ability along with the most supportive and hardworking family I know of.”