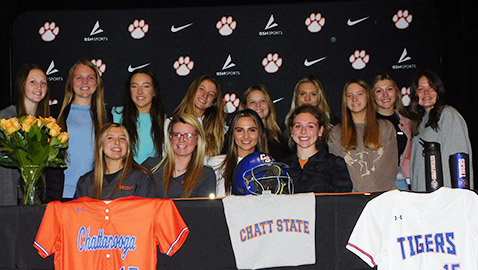 When it comes to softball, Macy Belyea is like a Swiss Army knife. She’s very versatile.

The Powell senior signed scholarship papers with Chattanooga State Community College in a ceremony at the PHS auditorium March 25.

Belyea transferred to Powell from Grace Christian Academy and last year was her first year with the Lady Panthers.

“I wish we had her four years,” said Powell Coach Jeff Inman at the signing ceremony.

Belyea’s “primary position” is catching, said Inman. “She’s one of the best catchers in the state.

“But she’s such a good athlete, we had needs and holes we couldn’t fill and she has stepped in and filled them for us.”

Macy also has played centerfield, leftfield, second base and first base, said Inman.

Belyea is strong at the plate, too.

“She’s a power hitter and a gap hitter,” said the Powell coach. “She hits the ball extremely hard and bats in the three hole for us right now.

“Chattanooga State is a good juco program and I look for her to do big things down there and then move on.”

“I actually took off my sophomore year so I could be eligible to transfer in,” she said.

“This has been the best two years of high school ever. I’ve loved it here so much. It’s a great program.”

Macy said she has played volleyball and run track in the past, but softball became her No. 1 sport.

As for her future playing days with the Tigers at Chattannoga State, Belyea said: “I’m a catcher / utility player,

“In juco, we’ll play doubleheaders, so I’ll be catching a game and then you might see me at shortstop or in the outfield the next game.

“I’ve play a little bit of everywhere,” she said and laughed about being kind of like a Swiss Army knife.

“I started in wee ball like everybody, but didn’t get into travel ball until I was 14 or 15.”

As for the Chattanooga State program, she said she loves the coaches.

“The environment there is so player friendly; they’re always going to be on your side,” she said. “Not only that, it is a really good program. They just went out and beat the No. 1 team in the NJCAAs, so I’m really excited about the program. It’s going to be competitive.”

After her two years in junior college, Belyea said: “I really want to play at UT-Knoxville or somewhere in Florida, like UCF or Florida State.”

Macy said she has a 3.7 GPA and plans to major in Sports Management.

“I just want to say thank you to all my coaches; the program has been great and I just love Powell softball so much. They’ve done a lot for me.

“And I want to thank my family and my parents for everything,” added Macy. “It’s been a rough and bumpy road in getting here, but I’m glad where I ended up and I wouldn’t ask it for any other way. I just want to thank everybody for helping me out.”