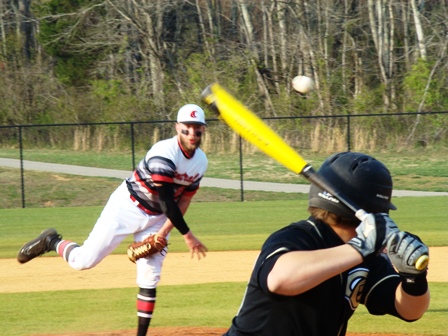 Keep an eye on Cole Rheinecker.

The Central High freshman stood out with the glove and bat and on the mound to lead his team to a doubleheader sweep over visiting Giles County at Bud Bales Field Wednesday.

In the Battle of the Bobcats and matchup of head coaching brothers Matt Byrd of Central and Jonathan “Turtle” Byrd of Giles County, Knoxville’s cats had the sharpest claws as they posted 11-1 and 9-6 victories to halt an early season four-game losing streak.

The sweep improved Central to 3-5.

Giles County, which also lost a 4-3 decision on a three-run walk off homer at Catholic on Tuesday, headed back to Pulaski with a 2-4 record.

Rheinecker saw action at second base and shortstop in the twinbill. He also was the closer in the nightcap, striking out two batters in the top of the seventh. Offensively, he had a double, two singles and two RBI in the two games.

“We have put a lot of responsibilities on Cole as a freshman and he has responded well,” stated Coach Byrd via text message Thursday. “I think Cole has a chance to be a really special player and will only continue to improve as he gets bigger and stronger.

“I have no doubt in my mind that he is one of the top freshmen in the East Tennessee area and if he continues to work hard and develop as a player he will be drawing a lot of college interest in the future.”

Cole’s brother Dane Rheinecker, a junior, played third base and also contributed at the plate.

In the opener, Jackson Greer was in command on the mound and hurled a five-hitter. The senior is known more as a talented catcher and is headed for East Tennessee State University.

Game 1 was tied 1-1 until Central scored three runs in the fifth inning. A seven-run sixth enforced the mercy rule, ending the game.

Bradley Clark had an RBI triple in the second for Central. In the fourth, Cole Rheinecker smacked a leadoff double into the left-center gap to spark a three-run inning. Dane Rheinecker singled to load the bases. A hit batsman plated Cole. Bass Cooper’s sacrifice fly scored the second run. Riley Thomas singled in third.

In Game 2, Giles County used five hits, including a double by Jayson Hamilton, plus one base on balls and a hit batsman to score its six runs. Clark got just one out before being replaced by sophomore reliever Trevor Ferguson, who induced a popup to first and a strikeout to end the uprising.

Some strong defensive play kept the visitors from scoring more. In the second inning, catcher Steve Trewhitt gunned down a runner trying to steal second base. In the third, Cole Rheinecker snagged a line drive and doubled up Sam Hatfield at second.

Central cut into the Giles County lead in the third with a two-out, two-run single to center by J.J. Howard. Dane Rheinecker followed with an RBI single.

Lyndon Wils on entered to pitch for Central in the fourth and threw three shutout innings to log the mound win.

Central erupted for five runs in the fourth to go ahead. Errors by Giles County’s defense were costly. Cole Rheinecker had an RBI single. On a potential double play, Giles County’s second baseman dropped a throw from the shortstop, leaving the bases loaded with one out. Then the right fielder dropped a routine fly ball and two runners raced home to tie the score 6-6. A balk scored a runner from third and Central moved ahead 7-6. Greer singled up the middle to bring home Howard and make it 8-6.

Central turned a 6-4-3 double play in the fifth with Clark to Cole Rheinecker to Cooper.

In the Central sixth, Alex Haynes led off with a single and Howard eventually scored the game’s final run on a ground out.