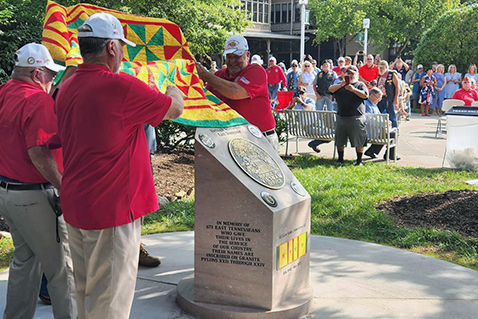 Back in January the Knoxville City Council met and voted to expand the East Tennessee Veterans Memorial display in World’s Fair Park. Last Tuesday morning the Vietnam Veterans of America unveiled a marble monument with a large crowd in attendance.

The Vietnam Veterans requested an area adjoining the existing veterans memorials, tall square marble monuments inscribed with East Tennessee causalities from World Wars I and II, Korea,  Vietnam, and other conflicts. It was a healing time for Vietnam veterans and their families and another way to say “Welcome Home.”

Planned and executed by the Bill Robinson Vietnam Veterans of America Chapter 1078, the expansion of the veterans memorial and the placing of the monument has been planned for several years. Ron Kirby and his committee pushed the project forward. The ceremony began with the landing of a UH-1 “Huey” helicopter by the Knox County Sheriff’s Office.

At 9:30 the ceremony began and culminated with the unveiling of the new monument. Each side of the monument displays information and graphics about the conflict, the various campaigns, the POW-MIA, a hand shake with “Welcome Home” and the Vietnam Service Ribbon. The top of the monument has a Republic of Vietnam Service image, the crests and shield of all the military services, and the message “Dedicated to the Vietnam Veterans of East Tennessee.”

The Quilt of Valor that covered the monument until the big unveiling was made by Donna Buswell and Combat Quilter Andrew Lee.