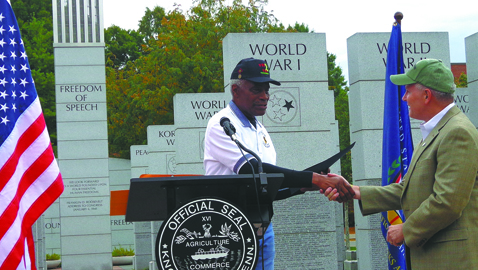 Thursday was special for Vietnam era veterans at the World’s Fair Park those soldiers, sailors and airman were honored in a special ceremony by Vet2Vet Tn. The ceremonies were hosted by Vet2Vet President Freddie J. Owens.

Each Vietnam and Vietnam Era veteran was honored with a proclamation and a Vietnam service pin.

Owens noted the 50th anniversary of the Vietnam War and noted the “valor of the men and women who served.”  He said the Vietnam Era veterans served to “protect the ideals we hold dear” and spoke of the “scars, seen and unseen” that many have.

“This commemoration is for you,” he told a large audience of veterans.

Unfortunately our Vietnam veterans didn’t get the love and respect they deserved when returning home from war,” Burchett said, “This gives us a chance to honor their service and sacrifice.”

“I’m a Christian. I owe everything in my life except my salvation to the men and women in uniform,” Burchett said.

Owens  than presented certificates to various people and organizations that help with the continual recognition of veterans and then the Vietnam Era veterans were honored, one by one, in a ceremony that began at 10 a.m. and was scheduled to run until 2 p.m.

The East Tennessee Veterans Memorial has several large square marble pillars with the names of those fallen military members from our region, each pillar noting in which conflict they served. Some 660 names appear on the Vietnam stone including 91 names from Knox County.