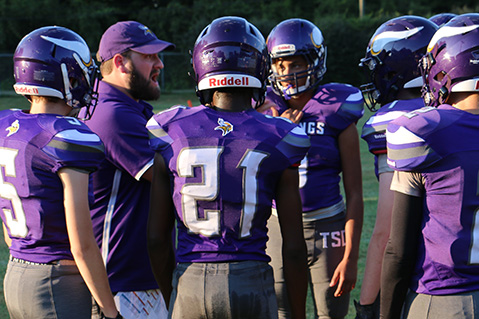 Tennessee School for the Deaf hadn’t won a football game since the coronavirus pandemic hit the Knoxville area in March of 2020.

But after trailing South Carolina School for the Deaf most of the way last Thursday night, the host Vikings took the lead with 1 minute, 20 seconds remaining and refused to give it up to notch a 44-36 win over the Hornets at Chambers Field.

Senior Gage Conger was the Star of the Game as he turned in big plays on offense and defense down the stretch for TSD, now 1-1.

With the score tied 36-all, Conger spun through an attempted tackle by South Carolina’s Dacorion Horton on a 27-yard touchdown run to give TSD its first lead. Elijah Echols powered over the goal line for the two-point conversion.

Playing 8-man football on an 80-yard field that also was 10 yards narrower, there was still time for the Hornets to pull even, particularly after they recovered the Vikings’ onside kickoff attempt at the TSD 26-yard line.

But on first down, the football was popped out of the hands of a SCSD running back and Conger recovered it at the 20 with 1:05 left.

All the Purple and White clad Vikings had left to do was take a knee three times to run out the clock.

The win was the first in TSD Coach Bill Osborne’s career. He became the Vikings’ head coach last season.

“Guys steppin’ up,” said Osborne when asked what he felt was the key to the win. “We were missing our leading tackler and I think that showed up early. The guys finally started steppin’ up and making some tackles. All eight were running to the ball and that was a big key to it.

“They had a very fast No. 5 (Christian Washington) and he just kept going and going. Finally we started getting to him a little bit and everybody was getting involved.”

Conger may not have been the fastest back in the contest, but he used his blockers well to find running room time and time again. He finished with 221 yards rushing and four TDs.

“Gage is our senior leader,” said Coach Osborne. “We give him the ball the most. He takes the pounding, but he keeps getting the yards and moving the ball forward. I think he only dropped the ball one time tonight and that’s a big key to protect the ball and he did a good job of that. He just carried the team on his shoulders.

“A couple of other guys made some long runs and got involved, but Gage was the engine that kept us going.”

In addition to his fumble recovery that halted South Carolina’s last possession, Conger stripped the ball out of Ellis Brown’s hands as the Hornets were driving for a go-ahead score with 1:48 left. That turnover set up the winning touchdown for Conger and the Vikings.

Eighth grader Lorenzen Shaw contributed to the win with an 18-yard TD run that tied the score at 22-all in the third quarter.

With South Carolina leading 36-30 in the fourth quarter, TSD junior QB-DB Garrett Burns intercepted a pass with 5:34 to go. Conger raced 45 yards to the SCSD 12 on the next play and Burns followed with a TD run around right end to tie the score.

The Hornets’ Horton returned the game’s opening kickoff 60 yards for a touchdown and also scored on a 12-yard run on South Carolina’s second possession for a quick 16-0 lead.

After TSD tied the game, Washington sped 51 yards around left end to give the Hornets a 22-16 halftime advantage.

Washington also had TD runs of 30 and 19 yards in the second half plus a 45-yarder that was nullified by a blindside block.

TSD’s Burns had a 33-yard TD run called back on a holding penalty late in the first half.

Echols, a big junior lineman, was among the Vikings’ defensive leaders in the trenches and stopped one two-point conversion attempt early in the fourth quarter.

TSD didn’t play any games in 2020 due to the pandemic and was winless in 2021. Its last victory had been in 2019 against South Carolina on the same field.