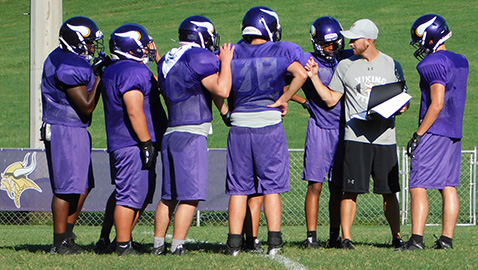 Tennessee School for the Deaf is eager to play some football. It’s something it’s been doing since 1892, but not much of lately.

TSD didn’t field a team in 2017 due to a shortage of players and the Vikings got to play only four games last season under new head coach Jordan Cooper after two games were cancelled because of hurricane weather.

TSD’s player numbers are up this year and Cooper expects to have a roster of 18 for Thursday night’s season opener at South Haven Christian School, which is located in Springfield, north of Nashville.

South Haven lost its season opener against Franklin Christian Academy 24-18 on Aug. 10 and the Patriots were scheduled to host Lighthouse Christian of Antioch Friday night, so they will already have two games under their belts.

The Vikings, who play 8-man football, saw their roster drop to 11 total players in 2018. Their increase in players this year will be very much needed as Coach Cooper said, “This might be our toughest schedule we’ve had in a long time, but I’m looking forward to it. It’s going to be a great challenge for these kids.”

In their third full week of practice last week, TSD had enough players for an intra-squad scrimmage at Chambers Field.

The Vikings were 1-3 last season but are expected to be better this fall as they return most of their starters. They are more mature and after what they learned last season, the game is easier for them from a mental standpoint.

“We are very junior heavy right now,” pointed out Cooper. “We have only two seniors, so next year is looking pretty good as well.”

TSD’s starting quarterback will be junior Jerry Williams. “He’s a very bright young man and can run and control the offense really well,” said Cooper, who has been at TSD since 2009 and assisted former head coaches Dick Henley and Barry Swafford.

This TSD squad has some physically gifted athletes, starting with junior Lorenzo Currie, who will be wearing jersey No. 23.

“He is just an all-round, excellent athlete,” said Cooper. “I feel confident that if you put him in any hearing school here in Knoxville, they would find a way to put him on the field. He’s a very special athlete.

“We have a lot of speed and a lot of athletes,” added Cooper, “which is to our advantage playing on an 11-man regulation size field against only eight defenders.”

Senior Tristen Davidson will be playing on both sides of the ball for the Vikings, starting out at tight end and linebacker. He also has experience as an offensive tackle and center.

“We’re going to move him around this year to wherever we need him,” said Cooper. “He’s a very versatile player.”

Shawn Mould, a junior, stands out on defense.

“For lack of a better word, he’s just a nasty player,” said the coach. “He likes to hit and loves to tackle. He’s not ever going to say, ‘No, I can’t do this or ‘No, I can’t do that.’  He would run through a brick wall for you. He’s one of the most dependable players we’ve got.”

Two other solid juniors include Ri Carylon, who can play in the slot and at running back.

“He’s going to get a lot of touches this year as well,” said Cooper. “Last year was a good learning year for him, but I think he is starting to get really comfortable with the running back position. I think he can do some good things this year.”

The TSD coach also is high on X receiver Malcolm Williamson. “He’s going to make some plays this year.”

TSD will play a seven-game schedule, including five games against Mason-Dixon Conference foes. All of the deaf schools are playing 8-man football now in the conference, except Alabama, which has indicated it may be in the future.

Alabama, of course, will play the 8-man game when it hosts TSD Sept. 19.

“The Alabama game is an awesome rivalry,” said Cooper. “All of the alumni talk about it. I love hearing stories from Coach Swafford about those games.”

A new conference opponent on this year’s schedule is Florida on Oct. 12. “Nobody here at TSD remembers the last time we played Florida,” said Cooper. “They went down to 8-man this year. We’ll go there next season, and I think the boys are excited about going to St. Augustine next year.”

TSD will host Mississippi in its homecoming game on Sept. 28.