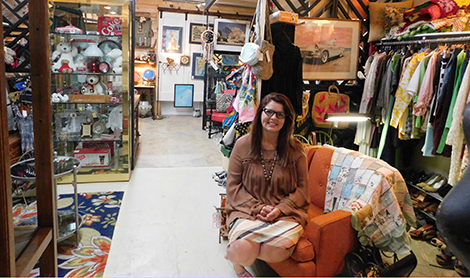 Jeana Vaughn has always been a collector and now, she owns a Fountain City store where she hopes her customers may find merchandise that may bring back some fond memories.

Vaughn recently opened Vintage, Etc. at 3000 Tazewell Pike. It’s listed as a vintage clothing store, but a rip through the store, which opened in Fountain City in May, reveals so much more. Customers can find furniture, antique phones, vintage glasses and coffee mugs, DVDs, books (both hardbacks and paperbacks, vinyl records, a few compact discs, art pictures, ceramics, various toys and much more.

The store will have a grand opening on Saturday and Vaughn is hoping to welcome many visitors.

“We just want to let people know we’re here,” said Vaughn, who previously had her store on McCalla Ave. in East Knoxville. “We have something here for everyone. That’s why I put ‘etc.’ in the name of the store. I’ve thought of other store names.

“If a couple comes in, I don’t want to have the wife come in and have the husband feel like he has to wait in the car.”

Vaughn discovered her passion for collecting early in life. That, coupled with the fact that she hates to see things go to waste, is what inspired her to open the store, which is always on the lookout for vintage merchandise.

“Two things really inspired me to open a store like this,” she said. “When I was younger, I had a neighbor and he was a little bit older than me. I think he had muscular dystrophy. He was confined to a wheelchair.

“I would come and I would wheel him up and down the neighborhood. Later, he got a motorized wheelchair and he took me for a ride. When I would bring him back, his mother would always give me a little trinket, or something. I would tell her that I couldn’t have it and then, she’d tell me that if I didn’t take it, she was just going to throw it away.”

And Vaughn said that she hates to see anything useful wind up in a trash can or landfill.

“I just hate to see anything get thrown away,” she said. “I live in Halls and we take our trash to the dump and I see things that people throw away. I hate to see landfills get filled up.

“I don’t like to think of this as a resell business, but I guess that’s what it is. I don’t want to see people leave empty-handed. I just love to see someone come in here and find something that they really want.”

She also knows that some of her merchandise has sentimental value to her customers.

“Everything in this store has a story,” Vaughn said. “Sometimes, people come here and see things that bring back memories.”

Vaughn wants to encourage her customers to go on a hunt when they come to her store. She once found an ironic find at a yard sale a few years ago.

“I was at a yard sale and I was packing up and getting ready to leave and I saw these records,” she recalled.

After coming to a deal on the vinyl LPs, she placed them in a room. She would eventually go through them and found a .38 Special album that once belonged to her husband.

“My husband’s not exactly fond of my collections, so I put [the records] in a spare room,” Jeana said. “I went through them about a year later and I found this record by .38 Special and it had my husband’s name on it.

“His mom had them in the attic and she had donated them. It’s funny how it went from her and ended up at a yard sale and I ended up with it.”

In addition to selling her own merchandise, Vaughn opens her store to vendors and she feels rewarded when those folks do well.

“I like to see vendors do well. I’m as happy when they do well as they are when I do well,” said Vaughn, who has a regular job at a dental practice in West Knoxville.

Vintage, Etc. is truly a labor of love for Vaughn. It’s also a family affair. Her cousin, Brian Miller works in the store. Several of her other relatives have booths in the store.

“This is my downtime,” she said. “I’d rather come in here and work than watch TV.”