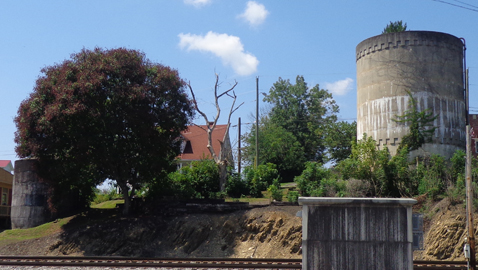 Want a visit to the past? Interested in ghost towns or almost ghost towns?

Probably no place in our region is more typical of small, 1880s era towns than Bulls Gap in southern Hawkins County. Located between Morristown and Greeneville the little town began before the railroad but bloomed during the heyday of the American railroad.

Bulls Gap is just an hour or so east of Knoxville and a nice drive and learning session for parents and children alike. It is a free history lesson that you may not soon forget. Founded about 1792 by John Bull, a gunsmith who received 55 acres on a land grant, the area became a battle site during the Civil War as Union forces attempted to secure and hold the railroad there.

You’ll miss the historic part of Bulls Gap if you enter from the west or east and stay on Highway 11E. The town’s history center is actually downhill from the main road and contains the city hall, the mayor’s office, a few shops, the Archie Campbell Museum and the Bulls Gap Railroad Museum.

Although the nationally known comedian and musician made his last home in Powell, Campbell was born near Bulls Gap and was active in getting his childhood home moved to the town.

The “downtown” section of Bulls Gap is on the National Registry of Historic Places and a visit there makes that designation obvious. Within the downtown complex are two abandoned water towers that once serviced rumbling steam engines that pulled freight and passenger cars. There are also several empty buildings there, including the Gilley Hotel, a four-story abandoned brick building that dates as far back as 1850. The hotel building was used by railroad workers and visitors and later contained a doctor’s office, barber shop, movie theatre, and a large dining room.

Today a peek inside the old hotel gives you a feel of life years ago.

Originally founded as the “Smith Hotel” the structure has gone through many changes and today is simply empty and historic.

Also in the downtown section of the little town is the Bulls Gap Railroad Museum with an extensive collection of railroad memorabilia. There are model trains, newspaper articles and photos with many of the artifacts  from people in the area whose family’s livelihood depended on the railroad.

You can get more information about visiting Bulls Gap by calling the Town Hall there at (423)235-5216. You can also find Bulls Gap on Facebook and Google or at www.bullsgaptn.com.