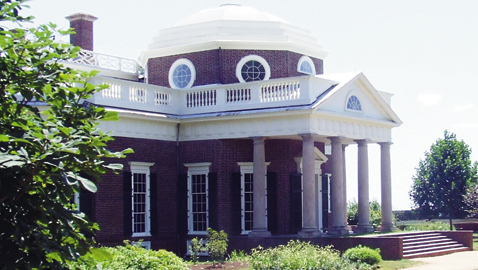 Yes, that’s Thomas Jefferson on the front but what most people think is the U.S. Capitol Building on the coin’s back is actually Jefferson’s home in Virginia, Monticello.  What a home it is, indeed.

Just about 8 hours from Knoxville by way of Interstate 81 and a bit of Interstate 64, the mountaintop estate is just southeast of Charlottesville, Va. The historic attraction is grander than you’d expect, stately and unique in its design by our early president and author of the Declaration of Independence.

Visiting Monticello will cost about $24 to be shown around by knowledgeable guides and the ticket includes three tours: the house, the gardens and the slave quarters. You will pay at the gift shop complex and ride a shuttle up to the house. There are often long lines waiting at the top for the guides.

Be sure to take lots of photos outside the home as you can’t take any inside. On entering you’ll notice a clock above the outside door and a larger one just on the inside. Jefferson designed the clock system that not only tells the time but also indicates, by weighted strands, the days of the week. He was a tinkerer, avid scientist, and a plant and vegetable experimenter. But he made one mistake on the weighted lines that tell the days of the week because the first floor is only tall enough to indicate Monday through Friday. There’s a hole in the floor and Saturday and Sunday are indicated in the basement, where the heavy balls on the line descend.

Jefferson served during the Revolutionary War, in the Virginia Assembly, as Virginia governor, minister to France, secretary of state, vice president, and two terms as president from 1801 to 1809. He retired after creating the Louisiana Purchase and funding the Lewis and Clark Expedition. For forty years he lived off and on at Monticello.

Nobody is perfect and Jefferson was no exception having fathered several children with his house slave Sally Hemmings. Their relationship, after the death of his wife, was long rumored and now proven through DNA tests of the Hemmings and Jefferson descendants. The tour takes into account, without apologies, the variations in his public statements against slavery and the fact that he owned, during his life, more than 300 slaves. He freedonly two of the Hemming children during his life and the other family members with his death.

After you visit Jefferson’s grave don’t pass up the slave graveyard just downhill from the parking lot and ticket office.

Many of the furnishings in the house are authentic or similar to the Jefferson family’s ownership. Inside the house and in the complex near the ticketing office are examples of ideas and improvements that Jefferson created during his life, including an example of a self -opening double door system that, by pushing one door the adjoining door opens.

Thomas Jefferson was a man of his times, full of thoughts of freedom but harnessed with slavery. The conflict is well told by the tour guides. After his 33 years of public service Jefferson founded the University of Virginia and lived out the rest of his years at the Monticello house and grounds.

Monticello is a private non-profit corporation founded in 1923. It is a United Nations Education, Scientific and Cultural location and receives no federal or state funds to support preservation or education.

Charlottesville has several motels and nearby campgrounds. Nearby, within about a 30 minute drive, are the homes of fellow early presidents including James Madison and James Monroe. Michie Tavern, a colonial inn that serves meals and has a museum and store, is just down the road from Jefferson’s home. Also nearby is Schulyer, Va., the homeplace of the creator of “The Waltons,” which features a museum and themed stores.

You can find all kinds of information at the Facebook page for Monticello or online at www.monticello.org. You can also call (434) 984-9800. The home is open all year except Christmas until 6 p.m.