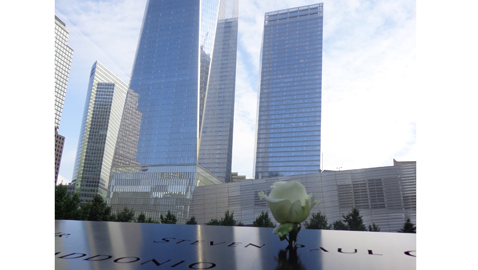 Did you know that  it’s quicker to fly from Knoxville to New York than to drive from here to Bristol or Nashville? Yep, in just less than two hours you’re there and what a change of cultures.

My wife and I recently spent six days in New York City, the first time we’d been there since the events of 9/11. Then, 15 years ago, we took a bus down to the still-smoking sites of the twin towers and saw all the tributes left there by survivors and citizens.

Our recent trip found the sites totally different, with the new tall tower built and operating, and thousands of people there prior to the ceremonies on September 11. The huge crowd was respectful and courteous to tour the 9/11 museum, visit the two waterfall pools there, and walk the site of the historic and horrible events.

At the pools, which mark the footprint of the two buildings, are the names of all the victims and a flower is placed on the name on the day of the birthdate of each person. What might surprise you is the number of Arab or Muslim names among the victims  who worked in the towers.

Inside the museum are the relics and photos of all of the events of that day, not only the two tower attacks, but also of the Pentagon and Pennsylvania airplane crash where the passengers rebelled and forced the plane down. In one room of the museum are photographs and names of each of the victims of that dreadful day and the display brings tears to your eyes.

Nearby is a sealed room that contains the body parts and remains that have not been identified and that attempt to identify them is ongoing.

Although we didn’t take it, there is a quick ride from the street to the top of the new tower there.

We also visited the fire station up in Manhattan where so many firemen had been stationed who perished in the fall of the towers.

The progress at the World Trade Center, which takes up several blocks, is amazing and is still being developed. The entire city, it seems, is under construction with renovation and new buildings. The attacks there apparently marked a new beginning.

New York City, 15 years ago, had some dangerous places and visitors were urged not to venture to some areas because of the crime there. Our latest visit found that most parts of the city are now safe to walk, visit, and shop. There’s a resurgence of safety now and a blossoming of commerce.

What a difference a sheer number of years can make in New York City and our nation. The amazing progress that our nation’s largest city has made should inspire the entire country and maybe, for a brief moment, sooth over the division of the upcoming election.

There seemed no division in NYC in the days leading up to the September 11th ceremonies and we saw no incidents or major protests of any type. Each day in the city was enlightening and exhausting. The transit system functioned well despite the huge crowds; there was no pushing or shoving even with the closeness on busses or subways.

It isn’t the same city we’d visited many times before 9/11; it was better and more civilized and welcoming. After a few days we got into the flow of things and temporarily became part of the spirit and community that is now New York City.