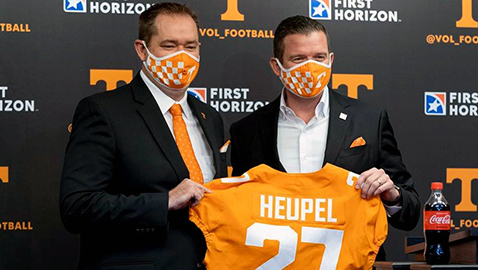 Last week the next era of Tennessee football officially got underway with the hiring of Central Florida’s Josh Heupel as the Vols’ new head coach.

“I’m excited about what we’re embarking on,” said Heupel during his introductory press conference on January 27th. “I’m excited to be a part of Vol Nation. I’m excited to do my very best for the state of Tennessee every single day. I promise you that our staff will do the exact same thing and I promise you that we are going to embark on becoming what we’re capable of becoming as a football program day-by-day and chasing and winning championships.”

He is the 27th head coach in the history of the program. He’s also the 6th different person to hold that title since the beginning of the 2008 season (well, the 8th if you count interim head coaches Jim Chaney and Brady Hoke).

Heupel went 28-8 in his three years at UCF. He has been able to develop quarterbacks. Heupel’s offenses have lit up the scoreboard everywhere he’s been.

Those are the biggest needs at Tennessee. New Tennessee AD Danny White hired Heupel at UCF, so it isn’t a surprise that he went down this route. UT was reportedly turned down by multiple head coaches at Power 5 schools, which also isn’t a surprise as Tennessee is expected to be penalized by the NCAA for recruiting violations that occurred under former head coach Jeremy Pruitt’s watch.

It doesn’t sound as if the looming NCAA action was much of a concern for Heupel. “I had a very frank conversation with every person of leadership about what had transpired, what their knowledge is, what they believe is going to transpire as far as any penalty,” he said. “The reason that I’m standing here today is because I believe in a very, very, very bright future for Tennessee football. I believe that there’s a minor speed bump that we’re going through, but the kids that are in our program right now and the kids that are being recruited are all going to have an opportunity to go play and chase championships.”

High school football keeps getting better in the state, and the Class of 2022 is looking like a monster. Heupel sounds like he’s been paying attention. “The most important thing we can do is lock down our borders,” he said. “We have to keep the kids in this state here and that’s for multiple reasons. They’re going to play championship caliber football, they’re going to be developed, they’re going to have an opportunity to move on to the NFL, they’re going to get a great degree and they’re going to be empowered to live inside this state once they’re done with that degree. We have to do that inside of our own borders and that’s going to come from me. A focus on recruiting in-state from me has to transcend through our coaching staff, but it also has to reside inside every Vol fan in the state of Tennessee. I say that meaning that everyone has to bring energy and passion, while sustaining a positive movement through everything we’re doing to create the sustainable change we need to lock down the borders here with our recruits.”

On social media, no one is ever happy, so of course, many Vols fans expressed their outrage at the hire.

“Some of you are awesome,” said White. “Some of you are failing right now. Why would we be negative? The future of this place is unbelievably exciting and positive, and I couldn’t be more excited to be here and I see nothing but great days ahead. I know that our fans are extremely passionate, and I love that. I can’t wait to know many of them and work with them. I can’t get to know them all because there’s so many of them, but the idea of turning your passion and something you love into negativity, I don’t understand that. I think that this athletics department has been through some challenges, and again, we have really great days ahead. I think people will see that and start having some more fun with their Vol fandom.”

You have to give White some leeway here. Unless you’ve lived Tennessee football since 2008, you really have no idea what this fanbase has been through.

Will this work? Will Tennessee return to the top of the SEC?

Only time will tell… and that means Tennessee fans have to be patient. Again.