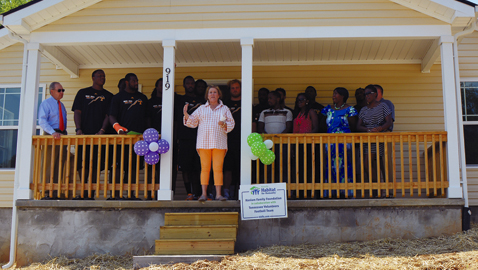 photo by dan andrews.
Members of the Vols football team handed over the keys to a new home last Thursday after working with Habitat for Humanity to build it.

“One of the pillars of our ‘Vol for Life’ program is the goal of becoming champions in the community as well as in the classroom and on the field.” said University of Tennessee head football coach Butch Jones.

Proving that the volunteer spirit extends far beyond the gridiron, University of Tennessee football players spent every Saturday during the months of June and July working on a Habitat for Humanity house for Drocella Mugorewera and Jean Damascene Nkurunziza- Rwandan refugees who now live in Knoxville.

Drocella initially came to East Tennessee without her husband and five children. Drocella worked hard to establish a life in Knoxville in hopes that her family would eventually be able to join her.  She learned to speak English, and to drive a car. Relying on her faith, she also found a church and a job at Goodwill.

Now reunited with her husband and children, Drocella and Jean are now enthusiastic future homeowners.  Their five children, nieces Yvette Kayumba, Arlette Mugeni, and Olga Kayumba; daughter Svetlana Nkurunziza; and son Patrick Nkurunziza, are all enrolled in college, and Jean, is a student at the University of Tennessee.

Drocella is thankful for the new home, which was sponsored in-part by the Haslam Family Foundation. This Thanksgiving, the family plans to host more than twenty guests in their home “with much fun, dance, and songs” -which is a celebration that would not have been possible in the apartment they previously rented.

“When you examine the amount of volunteer hours the team has performed, it shows the caliber of the young men we have here at Tennessee to lead our program’s rise to the top,” Jones added.

In addition to Habitat for Humanity, the Boys and Girls Clubs of the Tennessee Valley, East Tennessee Children’s Hospital, Special Olympics, numerous local elementary, middle, and high schools, Read Across America, and Knox Area Rescue Missions have all benefitted from the Vols community service efforts this year.