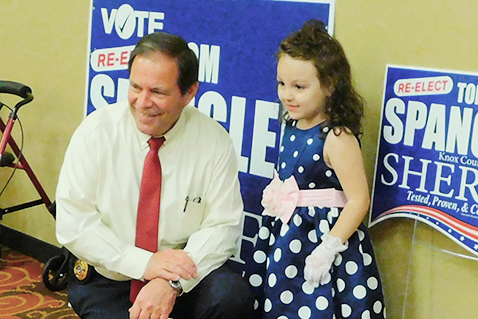 Hundreds of volunteers gathered at the EXPO Center on Clinton Highway to rally and volunteer to help Tom Spangler be elected to another term in the May 3rd Republican Primary. They signed in and were treated to hot dogs and barbecued pork sandwiches, visited with each other prior to and following the event. Mostly they were there to see and talk with Sheriff Spangler.

His campaign manager, Kimberly Glenn, told the volunteers about how to obey election place rules and be courteous. She said the sheriff is seeking re-election to a second term but that he has no plans to skip a third term and then run again, like his opponent.

He also asked his supporters to remember former Captain Rick Trott, who passed away recently, and also introduced and honored his current Chief Deputy Bernie Lyon who joined him on stage. Spangler recognized all the former deputies and military veterans in the gathering, his wife and family who attended, and his campaign staff. He said of his family: “They are why I do what I do.”

Spangler encouraged his volunteers to be positive and to not let the “trash being thrown” bother them during the campaign. The sheriff has been cleaning house in his department, shedding employees who violate rules or get involved with criminal activity.

“We have some more things to do,” Sheriff Spangler said and then joined his supporters for conversation, handshakes and hugs.