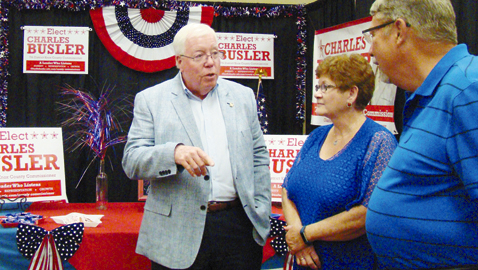 Voters in Knoxville and Knox County voters had the chance to meet dozens of candidates running in the 2017 city and 2018 county elections Thursday night at the Knoxville Expo Center.

Five of the nine city council seats are open this year due to term limits.

Two of the four candidates seeking the First District seat were present Thursday as Rebecca Parr and Greg Knox appeared. Andrew Wilson was absent. Stephanie Welch had campaign personnel at the event but she missed it due to a prior commitment.

Knox said he was pleased that so many candidates for the city and county elections turned out to meet voters. But he was disappointed with apparent voter apathy at last week’s meet-and-greet event.

“We had a good turnout with our candidates,” he said. “I wish we would’ve had more potential voters. They’re expecting voter turnout to be pretty low.

“The good thing for me is that I’ll be close to the top of the list, so if people are lazy, I can get their vote. We don’t have a lot of voters here tonight, but I was hoping to get more voters because we’re not in a presidential cycle.”

Mullins noted that Thursday’s forum played to his strengths as a candidate.

“My strong suit is interacting with people,” he said. “My willingness to work with businesses and the community are the biggest things that I bring and I have experience working with the [Knoxville Police Department] and the [Knox County Sheriff’s Office].”

Several candidates are in the primary election to represent the Sixth District.

The event was sponsored by the Graham Corporation, the Knoxville Expo Center and Moxley Carmichael.

Graham Corporation President Tim Graham said he was pleased to host the event.

“We don’t do this every year but we try to do it when we have a large number of candidates,” he said. “We’ve done four of these over the past 10 years and it’s a fun event.

Several candidates seeking county commission seats and other offices were also present. County offices, which will be contested, include Register of Deeds, Criminal Court Clerk and Circuit Court Clerk.