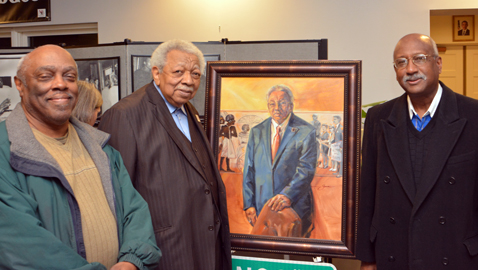 Photo by Dan Andrews.
Dewey Roberts, Jr., Avon Rollins and commissioner Daniel Brown are pictured with a portrait of Rollins at the Beck Cultural Center.

2014 marks 50 years since President Lyndon Johnson signed the 1964 Voting Rights Act. 1964 was also the year that Dr. Martin Luther King, Jr. accepted the Noble Prize for Peace and his speech from the Oslo ceremony was shown during the Beck Center event. In that speech, Dr. King said “Genuine brotherhood is more precious than gold.”

Dr. John O. Hodges, born in the Mississippi Delta into a sharecropper’s family and a former UT faculty member in the Department of Religious Studies, was the keynote speaker for the event. Dr. Hodges told the large crowd that discrimination still exists in our nation, and “concrete action” is where the civil rights movement must go from here. He specifically pointed to growing restrictions on the right to vote and called voting “the most precious of our freedoms.”

“We are a long way from the community that Dr. Martin Luther King spoke about,” Dr. Hodges said.

Rev. Renee Kesler, Executive Director of the Beck Center, welcomed the audience to the program, entitled “Going Forward” and introduced Knoxville Mayor Madeline Rogero. Rogero asked the audience to consider “what has changed in our lifetime” and credited teachers and preachers for educating an understanding of tolerance in children.

“We’re still wrestling with the questions of race and injustice,” she said, adding that the answer “only may happen when we come together.”

All year series’ theme has been “Unfinished Business: Then, Now and Going Forward.” The program began in February with the roundtable discussion “Voting, Voting Statistics and Districting.”  An art exhibit, a screening of the “Cesar Chavez” film and a Fair Housing Conference was held in April. In June, the series featured a “mass meeting” with Rev. C.T. Vivian and July and October saw civil rights marches. In September “Say It Loud” celebrated Knoxville’s Freedom Summer with film, music and arts and in October with an ecumenical worship service.

The Beck Cultural Center is a storehouse of African-American history and has a collection that no other black museum in the nation has. It features exhibits that rotate on an ongoing basis as well as exhibits that are permanently on display at the Center. Established in 1975 to research, collect, conserve and display artifacts, artwork, photography, books, films, writing and memorabilia from black history in East Tennessee the Beck Center is located at 1927 Dandridge Avenue. You can call them at 524-8461 or find the on the internet at www.beckcenter.net.