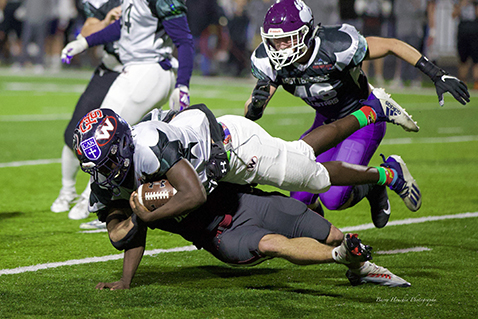 After two football games between the East Tennessee and Knox County All-Stars in the Rivalry Showcase of seniors, things are all even on the scoreboard.

The ET All-Stars were rewarded with the Bob Black Trophy, named in honor of the longtime Fulton football coach.

With an estimated turnout of 5,000 on hand and a TV audience tuned in, a trio of Anderson County Mavericks executed some razzle-dazzle on East Tennessee’s opening possession to take the lead.

Quarterback Walker Martinez threw a backward pass to Jermain Allen on the left side and Allen threw the ball downfield to wide receiver Bryson Vowell to complete the touchdown play from midfield.

The Mavs, incidentally, had just a week earlier captured their first state championship (Class 4A) at Chattanooga.

Halfway through the opening quarter, ET snapped the ball over its quarterback’s head and it was recovered by Knox County’s Eli Etherton of CAK at the 37-yard line.

De’Sean Bishop of Karns, the two-time Class 5A Mr. Football honoree, ran around left end for a first down at the 11, but on third down Farragut QB Luke Johnson was picked off to end the threat.

Carter’s Chandler Wilson, however, pulled the Knox County team into a 7-7 tie with 1:53 left in the first quarter when he threw a 55-yard touchdown pass down the middle to Catholic’s Sam O’Leary and Irish teammate Brock Taylor added the PAT kick.

The 6-4, 190-pound Vowell’s second TD catch put East Tennessee back in the lead 14-7 early in the second quarter.

Wilson’s strong arm again pulled Knox County even as he completed a 68-yard TD pass to Farragut’s Elijah Gibbs and Taylor’s extra-point kick tied the score at 14-all with 3:55 remaining in the second quarter.

Austin-East defensive tackle Jabrillion Lauderback broke through to block an East Tennessee punt and Knox County recovered the ball at the ET 39 with one minute left in the half.

East Tennessee went on a drive after intermission and Knox County was assessed a pass interference penalty on a third-and-14 play. Later in the march, Martinez connected with Vowell for first-and-goal at the 10.

On second down, Dakota Waldo of Rockwood scored on a 10-yard run up the middle to give East Tennessee a 21-14 lead midway through the third quarter.

Wilson and Knox County drove to the ET 32 on its next possession, but could get no closer.

In the fourth quarter, KC upped the tempo and again drove into ET territory. Wilson passed 33 yards to Pierce Browning of Grace Christian for a first-and-goal at the 6. But Bishop was stopped for no gain and two Wilson passes fell incomplete. Taylor missed a 23-yard field goal with 7:07 on the clock.

After an East Tennessee punt, Wilson again led Knox County down the field. His pass over the middle to LaShaud Holloway of A-E picked up a huge first down at the ET 22-yard line. But two plays later, Wilson’s pass was intercepted by Jefferson County defensive back Blake Overton at the 7 with 2:15 to go.

East Tennessee picked up a couple of first downs and took a knee to run out the clock.

In addition to the two All-Star teams, 300 of the area’s top band members, 60 cheerleaders and 30 flag corps members were part of the show.

While Anderson County, with its fireworks and Jumbotron, was a great venue, Mark Packer would like to rotate the game among East Tennessee and Knox County sites and is looking for a high school in Knox County that could host it in 2023.

Packer started the Rivalry Showcase so college recruiters could have another chance to evaluate top senior players.