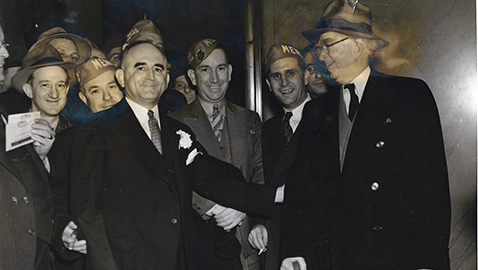 Walter Chandler enjoyed a long and productive political career, serving as a state legislator, congressman and mayor of Memphis.  Chandler was also a highly successful attorney and was responsible for the Baker vs. Carr lawsuit that guaranteed Americans the right of one man, one vote.

A native of Jackson, Tennessee, Walter Chandler taught school and worked as a reporter for the Knoxville Sentinel before earning his law degree and moving to Memphis.  Chandler was elected to the Tennessee House of Representatives in 1916 and the State Senate in 1920 and reelected in 1922.

Walter Chandler was referred to by some as “Captain”, as that had been his rank while fighting in the First World War.  Chandler had been part of the 114th Field Artillery unit, which had been comprised entirely of Tennesseans.  That unit had been commanded by former U. S. senator Luke Lea and included future governor Gordon Browning in its ranks.

By 1928, Chandler was chosen as the president of the Tennessee Bar Association and it was also the same year he became city attorney for Memphis.  Chandler, a balding man with sharp features, was also an authority on things Tennessee, as well as historical documents, rare books and stamps.

Walter Chandler remained the city attorney for Memphis until 1934; E. H. Crump had displaced the long-time congressman in 1930 when the Memphis Boss decided he would go to Congress himself.  Crump was elected in 1930 and reelected in 1932.

Finding Washington, D. C. was not Shelby County, he disliked being away from his family, nor did he especially enjoy being one of 435 representatives.  Crump also noted he was just not that important in the nation’s Capitol, especially when compared to his friend Senator McKellar.  The senator was one of the Senate’s more senior Democrats, a ranking member of the powerful Appropriations Committee, and it was McKellar who mattered in Franklin Roosevelt’s New Deal.  It was no surprise when Crump decided he would not seek a third term in Congress in 1934.

Crump decided Walter Chandler would be the new congressman from Shelby County.  It was one of E. H. Crump’s better picks, as Chandler proved to be a diligent and effective congressman.  Chandler enjoyed the work and was the author of the Chapter Thirteen bankruptcy law.  Congressman Chandler loyally backed President Roosevelt and the New Deal.

Higher ambition occasionally flickered in the breast of Walter Chandler and he made a surprise announcement he would be a candidate for governor of Tennessee in 1938.

H. Crump had fallen out with incumbent Gordon Browning whom he had backed in 1936 and Browning was waging all out war with the Shelby County machine.

Senator McKellar had not supported Browning in 1936, correctly suspicious Browning had designs on his seat in the Senate.  McKellar and Crump were gearing up to remove Browning from office by defeating him in the 1938 Democratic primary.  Walter Chandler had no objection to being the instrument of Gordon Browning’s political demise.  Although Senator McKellar issued a perfunctory endorsement of Chandler’s gubernatorial candidacy, Crump was reportedly uneasy with the notion the gubernatorial candidate would come from his domain of Memphis.  Also, McKellar was thought to be lukewarm about Chandler’s prospective candidacy.  Almost as quickly as he announced he was running for governor, Walter Chandler declared he was withdrawing from the gubernatorial contest and seeking another term in Congress.

It was a somewhat embarrassing situation for Chandler, who had to defer to the candidacy of Prentice Cooper, a largely unknown state senator from Shelbyville.  Chandler was the indirect beneficiary of Crump’s falling out with Mayor Watkins Overton.  The mayor had served in office for twelve years and had helped Crump stamp out the last of the political opposition inside Memphis and Shelby County when he was first elected in 1927.

Overton resigned in 1939 and the Memphis Boss ran as an “elector” for Walter Chandler, who was the personal choice of the Memphis Boss to become mayor of Memphis.  Crump stood in for Chandler on the ballot in November of 1939, supposedly because President Roosevelt needed Chandler’s vote in Congress for important lend-lease legislation.

Crump took the oath of office while standing on the back of a train headed for the Sugar Bowl and just as quickly resigned, allowing the City Commission to appoint Walter Chandler mayor.

Although Chandler did not view becoming mayor of Memphis as a promotion from having served in Congress, he resigned his seat in the House of Representatives and went home.

Chandler gave Memphis an able and honest administration for the next seven years and he easily won election to a full term in his own right in 1943.  The Nashville Tennessean amused itself by frequently promoting the notion of breaks in the ranks of the Shelby County organization.  In November of 1945, the Tennessean reported there had been a “break” between Mayor Chandler and the Memphis Boss.

Chandler described the report as “absurd and wholly untrue”, saying his relations with Crump and the machine were “most pleasant.”  The Memphis Boss was startled when asked about a break with Chandler.

Reports of Walter Chandler retiring from office persisted in the Tennessee press that same month and in spite of the denials issued by the mayor and Crump, there was some truth to the rumors.  While some news reports stated Chandler had long wished to return to the private practice of law, the truth was Walter Chandler apparently still harbored higher political ambitions and hoped Senator Kenneth D. McKellar would retire in 1946.  McKellar was Tennessee’s first popularly elected United States senator and had been in office since 1917.  The seventy-seven year-old McKellar showed no signs of slowing down, much less retiring.  President Franklin D. Roosevelt, anticipating the post war world and the influence of K. D. McKellar in the U. S Senate, asked E. H. Crump to visit Washington, D. C.  in 1945.

The President was due to leave for his retreat in Warm Springs, Georgia soon and the topic of conversation was McKellar.  President Roosevelt urged Crump to withdraw the support of the Shelby County machine from Senator McKellar should he run again in 1946.  The President believed if the Shelby County organization refused to support McKellar again it would force the senator to retire.  Crump, who distrusted Roosevelt and did not much like the President, told FDR McKellar would run again in 1946.  Roosevelt barked if McKellar ran again, he would be defeated.

The Memphis Boss calmly told the President he was wrong; McKellar would run again and win an unprecedented sixth term.  Weeks later, Franklin Roosevelt was dead and McKellar was poised to run again in 1946.  Walter Chandler wanted to run for the United States Senate as well and hoped the Memphis Boss would convince McKellar to retire gracefully.

Crump, who had no trouble telling a President of the United States, he was backing McKellar once again, had even less compunction about telling his hand-picked mayor the same thing.  Chandler, a sensitive man, was so deeply hurt he abruptly resigned as mayor of Memphis, which shocked E. H. Crump.

Crump and the Shelby County machine would flounder a bit, losing the 1948 election due to the Memphis Boss’ serious political miscalculations and Memphis went through a couple of mayors before Crump called Watkins Overton back into service.  Overton remained mayor for four years before he, too, resigned.  Frank Tobey, who some say personally betrayed Watkins Overton, was mayor until he died unexpectedly.  Crump had died in October of 1954 and such was Walter Chandler’s standing in Memphis that he was elected to serve as mayor in 1955 for the remaining year of Tobey’s term of office.  It was Walter Chandler’s last elective office.

Chandler’s interest in redistricting had been due to his election to Tennessee’s Constitutional Convention in 1953.  Chandler, along with former governors Prentice Cooper, Ben W. Hooper, and Jim Nance McCord had been elected as delegates to the Constitutional Convention.  Rural interests in Tennessee had refused to redistrict according to population, meaning some districts had ten times the population of more urban districts, yet had the same representation.

Chandler joined with Hobart Atkins, a Republican state senator from Knoxville, who had long been vexed by the failure of Tennessee’s legislature to legitimately redistrict.  The case went all the way to the U. S. Supreme Court and the Tennessee General Assembly was placed under a federal court order requiring it to meet the one man, one vote standard of representation.

Finally, Tennessee would redraw its congressional and legislative districts on the basis of population.  The legislature was dragging its feet and asking for an extension on the order to redistrict just before Walter Chandler’s death on October 2, 1967.

One of Chandler’s last public statements involved the decision as to whether he would join the motion to ask the court not to grant the Tennessee legislature an extension.

Walter Chandler still retained an interest in Tennessee government and politics and he issued an endorsement that surprised some in 1966.  Chandler gave his blessing to the candidacy of thirty-five year-old John Jay Hooker, who was making a surprisingly strong bid for the Democratic gubernatorial nomination against former governor Buford Ellington.  Chandler disliked the “leapfrogging” between Frank Clement and Buford Ellington, which had lasted since 1953.

Walter Chandler told Hooker, “I’ll do anything I can to help you get rid of 14 years of machine control in state government.”

“I agree with you it’s time for a change,” Chandler added.

There was some irony in Chandler’s denunciation of machine politics when he was entirely the political product of the Crump machine.

Quite likely, Chandler’s endorsement of John Jay Hooker was motivated by his belief Ellington would do little to reapportion the legislative and congressional districts.  “I believe as you do that it’s time for an independent legislature, and it’s time the cities of Tennessee got their fair share of the representation in the legislature and in constitutional conventions,” Chandler said to Hooker.  Walter Chandler likely saw Buford Ellington as yet another representative of an agrarian society that no longer existed in Tennessee.

Both Walter Chandler and former governor Gordon Browning strongly backed Hooker over Ellington.  Still, the former governor managed to eke out a win inside the Democratic primary.

Despite his advancing years, Walter Chandler still practiced law and seemed to be in good health.  Shortly before his eightieth birthday, Chandler made an extensive trip that took him to New York City, Washington, D. C. and Providence, Rhode Island.  Chandler was looking forward to a “huge party” that was planned to celebrate his coming birthday when he suffered a heart attack while at home.  The former mayor had another attack later that day and died.

Walter Chandler did not live to see his adopted son, Wyeth, given his late wife’s maiden name, elected to the Memphis City Council.  Wyeth Chandler would go on to serve for ten years as mayor of Memphis before being appointed to the Circuit Court bench by then-governor Lamar Alexander.

Although he revered his late father, Wyeth Chandler was quite unlike Walter; tall, stately, with a full head of white hair, Judge Chandler had his portrait made in his judicial robes with his beloved poodle, Millie, who was resplendent with bows in her hair.  Chandler was so fond of Millie, he held court while holding her in his lap.

Yet Wyeth Chandler was a man’s man, who at one time bore a striking resemblance to the late movie star Tyrone Power, occasionally got drunk in redneck bars and thought little of engaging in fist fights.  Judge Chandler died of a heart attack while mowing his lawn in the Memphis suburbs.

Both Walter and Wyeth Chandler would be exceptionally proud of Louise Chandler, daughter of John Wyeth Chandler, Jr., who became a lawyer and joined a Germantown law firm.