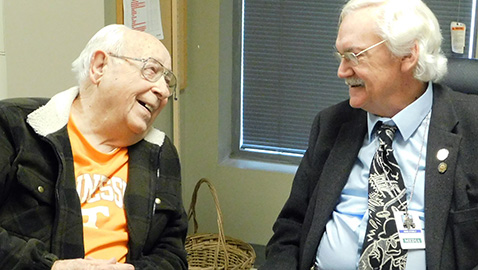 Walter Maples turned 90 years old this month. If you ask him what ninety years gets you, Walter will tell you.

“I’ve had an abundant life, the blessing of God not with money but with things we had a need of,” he said as he talked with The Focus’ Mike Steely recently.

Walter and his wife, Margie, were married for 70 years and had three children. “It was a very genuine love,” he said of Margie, who passed away last summer. Their children James Anderson Maples, Francis Drucella Maples and Amy Louise Maples were all born between 1951 and 1960.

“She was a Christian woman and we had a life together dedicated to the Lord. I felt the Lord blessing on us and he supplied the needs we had. I hope our lives gave an example that God is the head of the household,” he said

Although Walter and Margie attended school together it wasn’t until Walter was pitching softball in the Class A league at Old Knoxville High School when he met her. He explains her father operated the concession stand at Winona Avenue ballfields where she worked. Walt said he was known then by other players as “Side Arm Maples” in the league.

The couple dated and after high school Walt went to work for Graybar Electric as a salesman. On April 17, 1948 they were married and he worked for the company for many years.

In 1957 Walter was transferred to Bristol where he and Margie lived for four years. Asked about his favorite time in his professional years he cited these years in Bristol where he sold Zenith and Gibson appliances to stores.

“I was the manager and loved dealing with people,” he said.

The Maples family returned to Knoxville and were very active in church.

“She was a Presbyterian and I was a Baptist. She asked me to start going to her church and I did. We became members of Wallace Baptist Church. She played a wonderful piano and we were always involved in church choirs, in Gospel Music. I was a Music Director in two churches,” he said

Maples explained that about 17 years ago he and his wife started a senior ministry and choir called the “TOTS” which was short for The Old Time Singers. The group lasted for many years and only stopped performing two years ago. They would visit nursing homes and churches.

“I remember going to Holston Nursing Home. The place was full of people in wheel chairs and we were asked to sing ‘Amazing Grace.’  When we got to the last verse a lady in a wheel chair starting singing all over again and I’ve never heard it in ranges like that in my life, she was wonderful.”

After retirement Walter said he saw an advertisement in The Knoxville Focus for a delivery driver and applied. For four years Walt and Margie picked up papers at the Focus office every Monday morning and delivered to the West Knox and Lenoir City area. The route began with four stops in West Knoxville and a list of prospective delivery points.  Walt would drive and deliver The Focus; Margie would navigate and keep track of the paperwork.  By the end of their time running the route, the Maples Team built the route to 74 stops.

“I gave it up because of Margie’s health but I’m ready to go to work again,” he said, adding that he’s waiting for an opening to once again carry The Knoxville Focus.

Asked how he would like to be remembered Maples said “As a man who’s life showed people the presence of the Lord working in my life.”