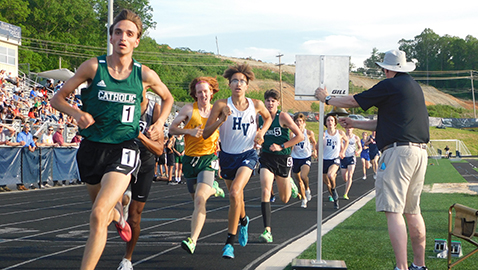 Kiyontae Warren came into the Knoxville Interscholastic League Track and Field Championships with the best time in the state in the 300-meter hurdles. He felt he had to back it up.

There was a burning desire inside of him to do just that.

“Today was the best day competition-wise,” said the Austin-East High senior April 30 at Hardin Valley Academy. “I felt like I had to prove that I’m one of the best in Knoxville. And that lit a fire in me.”

Warren turned in a sizzling time of 37.43 seconds, shattering his previous best of 38.6. It also was announced as the 22nd best time in the nation this spring and the sixth fastest ever in Tennessee.

“My time was based off the competition I had and the track,” he added. “I love this track.”

Kiyontae mentioned Gabel Fulford of Christian Academy and Jackson Bostick of Grace Christian being the chief competitors in the race and also gave credit to his teammate Robert Allen.

“They pushed me to excel,” said Warren.

It was a 300 hurdles race to remember.

Warren also had another impressive victory before the night was over when he edged South-Doyle star sprinter Elijah Young by one-hundredth of a second in the 200 dash, clocking a 21.89.

Kiyonte said it was the first time he had gone head to head with Young in his high school career.

“Coming into this meet, I knew that in the 200 Elijah Young was going to be my bait out of the curve,” said Warren, who started in Lane 4, to the inside of and behind Young, who was in Lane 5.

“I used it to my advantage, because I based my start off of him. It’s almost like a cheetah sneaking for a gazelle. You don’t want her to know you’re there too fast and you don’t want to jump too late.”

“This is where I really started racing with a team mindset going in when I was a freshmen and sophomore,” said Jake, who was national runner-up in the Foot Locker Cross Country Championships at San Diego in December and selected to run on the USA Junior National team in Scotland this past January.

“It’s fun to run solo events and do well, but like the 4×400 tonight, that’s the event I was looking forward to. We were a half-second off from qualifying for sectionals, so I was trying to pep up all the guys before the race.”

Renfree said he had fun at the KIL and his presence seemed to motivate others to try and keep up with the Notre Dame signee. And a few did, which Jake hoped would happen.

Miguel Parrilla won the 400 in 49.47 to help Hardin Valley’s boys claim the KIL team title for the third straight year and their sixth overall. HVA also got a first place finish from Luke Filipkowski in the shot put (48-8¼) and its 4×400 relay team of Parrilla, Austin Rome, Luke Anastasio and Kelton Gunn prevailed in 3:22.79.

A-E’s 4×100 relay team of Aristotle Huffman, Chris Stevenson, Devon Mitchell and Warren took top honors with a time of 42.74. The Roadrunners’ 4×200 combo of Ja’Zine Pelcher, Stevenson, Mitchell and Huffman also were victorious in 1:29.74.

Pictured above:
PHOTO BY STEVE WILLIAMS
Jake Renfree of Catholic leads the pack of runners as the bell is rung to signal the start of the final lap in the 1600-meter run at the annual KIL Track and Field Championships at Hardin Valley Academy April 30.