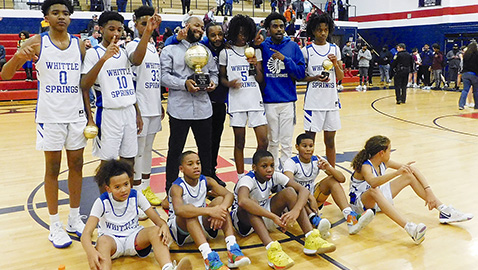 When the final buzzer sounded in the boys championship game of the James A. Ivey Jr. Memorial Basketball Tournament, it was Whittle Springs assistant coach Jadarius Suber who spoke first as the Warriors celebrated.

“We’re not done,” Suber exclaimed as Whittle Springs went to pick up the tournament championship after it routed West Valley 39-19 Thursday night at South-Doyle Middle School.

Once there was a time when the Warriors, who improved to 24-0 with their impressive victory over the Wolves, would’ve taken the tournament’s gold ball and walked off the floor victorious for a final time together.

Now the Warriors, the Wolves and Vine, which won Thursday night’s third-place game over Cedar Bluff 51-44 in overtime, will have the chance to advance to the state sectional tournament.

That event opens on Saturday, Feb. 1 at Hardin Valley Middle School. The winner of that tournament will head to Murfreesboro for the state semifinals.

Whittle Springs, Vine (which reached the sectional final before being eliminated by Powell in 2019) and West Valley will have the chance to become the first KCMSBC team to win a state title. The Panthers finished third at state last year.

Whittle Springs coach Linwood Holloway led the traditional celebration and cut down the net at South-Doyle after the game.

But like Suber, he knows that the Warriors are far from finished with their work this season.

“This is about more than just the county. When the clock hits triple zeros at state, then, we’ll be done,” Holloway said. “When I took this program over, I had a four-year plan and that plan was to be standing where we are right now. They didn’t win a game the year before I took over.

It took a little time for the Warriors to establish their offensive rhythm against the Wolves. Whittle Springs outscored West Valley 11-4 in each of the first two quarters Thursday night and held a big lead at halftime.

But the Warriors boasted a balanced scoring attack en route to earning the right to cut down a net.

“We all eat and we all eat good,” Holloway said of his team’s balanced attack.

For West Valley, Sam Tummins had six points while Kaleb Defendorf, Brett Holden and Drew Parrott each had four points. Parrott, Holden and Tummins were each named to the all-tournament team on a night when West Valley’s offense all but deserted it.

Despite seeing his team struggle, Wolves’ coach Noel Landrum couldn’t complain about his squad’s effort against the Warriors.

“I thought we played a good game,” Landrum said. “We played great defense. That team is averaging 65 points per game and I don’t think they’ve been held under 40 points at all this season.

“Offensively, we got good shots, but they just weren’t falling. Sometimes, they just don’t go down and honestly, I wouldn’t be surprised if we see them again. We’re pretty familiar with the teams in the sectionals. That’s the thing about sectionals; you’re not always familiar with your opponents. But we’ll be familiar with these teams. We run some tricky defenses, and if you have time to scout us, you can prepare for them. If teams don’t have time to scout us that gives us an advantage.”