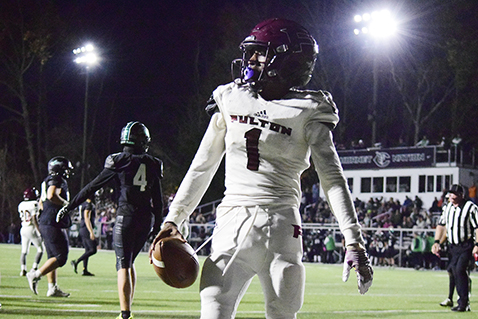 A lot of excitement can be found in small packages. And not just on Christmas morning or during a wedding proposal.

It can happen on a football field, too. Just ask Fulton High fans. Marcellus Jackson put a lot of smiles on their faces during the 2022 season and throughout his prep career.

The 5-9, 151-pound quarterback put on a show many a Friday night. During his senior campaign, Fulton lost more games than it won, but Jackson was still worth the price of admission.

Jackson is The Knoxville Focus / Coaches’ Knox County Player of the Year. He was a runaway winner much like he was as a runaway runner with the ball in his hands. His selection was based on regular season results.

Marcellus received six votes in the balloting – three more than Karns’ De’Sean Bishop, who finished his career as one of the state’s top all-time running backs. Brayden Latham, the leader of West’s unbeaten team, got one vote, as did Webb School quarterback Charlie Robinson and Powell junior defensive end Steven Soles.

Fulton had a 4-6 record in the regular season, but Bearden Coach Josh Jones said: “They’re 0-10 if he (Marcellus) isn’t on the team. Not one player made a difference to their team like him. He’s the best player with the ball in his hand in the entire area; it’s not close.”

Last week, Jackson was named a Top 3 finalist for the Tennessee Titans’ Mr. Football award in Class 4A.

His offensive stats (1,420 yards rushing and 17 touchdowns plus 1,874 yards passing and 23 TDs) played a big part in Marcellus being named the All-Knox County first-team quarterback. His 3,311 total yards compute to an average of 331 yards per game.

Jackson also played on defense and had 57 tackles, two TFLs and two sacks. He returned two interceptions for touchdowns plus caused three fumbles, recovered three and returned one fumble for a TD. He broke up 13 passes and blocked two kicks, too.

“To have someone like him who can do so many things with the football and competes the way he does, it’s always fun to coach those kind of kids,” said Fulton Head Coach Jeff McMillan, who added that “Marcellus always has a big smile on his face and enjoys playing the game and being around the other kids.”

McMillan went on to say: “Nothing is going to stop him from accomplishing what he wants to accomplish and the drive he has to be successful. All the great athletes have that. He kind of takes it to another level.”

Jackson has overcome his small size with ultra speed and quickness.

“He’s going to play on the next level; it’s just a matter of where,” said McMillan. “He’s got offers from NCAA Division 3, Division 2, Division 1 and NAIA.”

Coach McMillan assumes Marcellus will play on the next level as “a slot receiver, a kick returner, that kind of thing.”

McMillan said he doesn’t expect Jackson to play quarterback in college. “He’s special with the ball in his hands. Of course, we’ve been lucky enough to snap it to him and put it in his hands every play, but I think he’ll probably be a slot and return guy in college.”

McMillan expects Jackson to eventually play basketball this season. “He was pretty banged up when we got finished in football. He’s still having some shoulder issues and trying to get those taken care of. As tough as he is, he got banged up pretty good toward the end of the year.”

Jackson is a good student, said McMillan, and has over a 3-point average when weighted with his AP and dual enrollment classes, which earns him college credit.

“It’s just been a pleasure to be around him for four years and watch him grow and develop into what he has.”