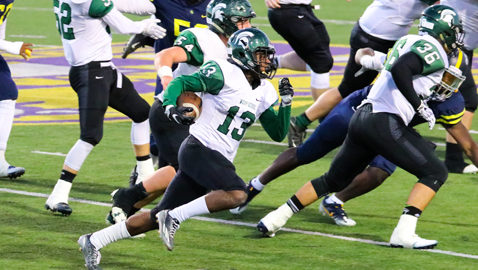 The Webb Spartans were looking for its ninth state championship, and fourth in five years.

But it would be Lausanne Collegiate School picking up its first gold ball.

On Thursday, December 1st, Lausanne edged Webb 12-9 for the Division II-A championship, in what was a surprisingly defensive matchup in Cookeville.

The Spartans (11-2) don’t throw the ball a great deal, but nearly scored on its first drive through the air.  Hunter Green threw a dart over the middle to Bryson Glenn, but he couldn’t reel it in.  Had Glenn caught the ball, he would have walked into the end zone on a 35 yard hookup.

Webb’s special teams opened the scoring late in the first quarter.  And would be Glenn atoning for his error.  Lynx punter Bruno Garcia stood in the middle of his end zone waiting to kick the football away.  But Glenn burst through the line and blocked the punt.  The ball went through the back of the end zone for a safety, giving Webb a 2-0 lead.

It stayed that way until the final minute of the second quarter, when it appeared that Lausanne (14-0) was about to take the lead.  They drove the football inside the Spartans 10-yard line.  The handoff went to sophomore Eric Gray.  He ran around the left side and was heading to the end zone but fumbled at the Webb 1.  The ball bounced into the end zone, where Morgan Ernst fell on it for a touchback with 46 seconds left in the half.

Webb held Lausanne scoreless at the half.  The Lynx had previously averaged over 43 points per game this season.

“Both teams have been successful scoring points all year.  But we were up 2-0 at the half. We didn’t expect that,” said Webb head coach Meske.  “Our defense played its best game of the year and their defense was great.”

The Lynx fumbled the opening kickoff of the second half, giving Webb possession at the Lausanne 30.  But the Spartans turned it over on downs.  The Spartans defense came up with 4 turnovers, but the offense couldn’t capitalize.

“It was hard to move the football,” said Meske.  “We had opportunities to get points and were not successful.”

The score remained 2-0 into the fourth quarter, when Lausanne finally broke through.  Eric Gray, who gained over 2200 rushing yards this season, scampered into the end zone from 14 yards out.  The ensuing conversion was no good, but with 10:22 to go, it was 6-2 Lynx.  That was also Gray’s 37th rushing touchdown of the season.

But the Lynx offense finally got clicking in that 4th quarter.  With 2:24 remaining, Gray, regarded as one of the best players in the state for the Class of 2019, scored on a 5-yard rush right up the middle of the Spartans defense.  It was 12-9 Lausanne.

The Spartans offense turned it over on downs, and Lausanne had a state championship in only its 4th year of existence.

It wouldn’t be a surprise to see Webb playing in this game again in 2017.  They’ll go into next season with a lot of experience at key spots, returning 8 starters on both offense and defense.  Meske did want to point out the efforts of those that will be graduating.  “All five seniors made a tremendous impact.  They are great kids and they are leaders.  They set an example and had a lot of success,” said Meske.

Webb fell just a few points short of their goal.  But Meske had nothing but praise for his Spartans.

“I couldn’t be more proud of this team,” said Meske. “They worked hard and were good teammates.  If we asked somebody to move to another position to help the team, they did so without hesitation.  You don’t see that a lot these days.  They are all friends and hang out together.  Four to 6 p.m. was always the best part of my day.  They were great to be around.”