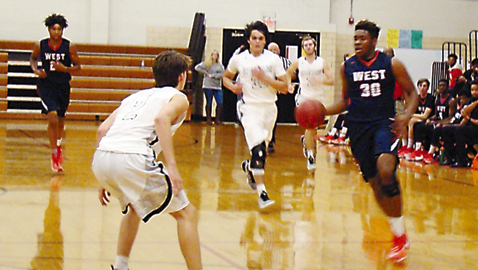 For the first quarter of its victory over West High School, Webb School of Knoxville’s boys basketball team struggled with the Rebels’ pressure defense. But after a sluggish beginning, the Spartans got things figured out.

“During the first quarter, I think we really struggled with their pressure,” Webb coach Ricky Norris said after his team overcame a slow start to notch a 61-38 victory over West in the first round of the Central Thanksgiving Tournament on Monday, Nov. 21 in Fountain City. “They have some of the best athletes in town and there’s no question about that. We knew that we were going to see that pressure.

The Spartans (3-0) settled down and took control of the game after halftime. Webb, however, fell behind 19-12 early as the Rebels (1-2) started fast. The Spartans rallied to pull even at 28-28 by the end of the first half.

Webb was able to tie the game despite the fact that three players made it into the scoring column over the first 16 minutes. Myles Rasnick and Chase Ridenour each scored 13 points before halftime while Emory Lanier had two before the break.

“Chase played well and Myles Rasnick really did a great job for us tonight,” Norris said.

Ridenour had a game-high 24 points while Rasnick added 21 and Lanier finished with seven.

Webb also got five points from Charlie Wyrick and two from Guthrie Bouchard-Dean but the difference in the game proved to be a tenacious Spartans defense. Webb also won the rebounding battle after halftime.

“We held our own on the glass and we thought coming in that that might be a difference in the game,” Norris said.

While the Spartans accomplished their goals after halftime, the Rebels simply couldn’t answer the bell in the third quarter,

Webb opened the second half with an 8-2 run and took a 36-30 lead. Defensively, the Spartans were also stingy.

West managed to score just 10 points after the break and didn’t make a field goal in the fourth quarter.

Adding to West High’s misery were multiple turnovers and lack of rebounding.

Rebels coach Chris Kesler was obviously frustrated after his squad fell apart over the final two quarters of contest.

“Webb is well-coached and they’re a very good basketball team,” Kesler said of the Spartans. “It’s always good to play a team like them early in the year because they give you a measuring stick so you can see where you’re at.

“This game was a tale of two halves for us. We came out flat and we’re still trying to find an identity. Hopefully, we can figure this out as the season goes on and we can play like they did tonight. Hopefully, we can learn from this.”

Tyrone Patterson led the Rebels with 14 points. He had all three of West’s field goals in the second half. He also made a foul shot in the final frame.