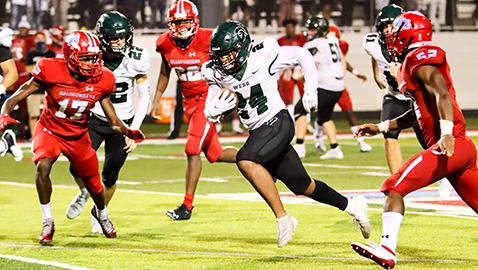 Webb School of Knoxville and Austin-East Magnet School squared off last year on opening night of the football season at Webb, and the Spartans ground out a 3-0 win.

Friday night at Sam Anderson Field, the Roadrunners and Spartans again paired up to kick off the 2020 season in a non-region game. It would be a long night – literally and figuratively – for A-E.

When, after a rain delay of nearly an hour and a half, the teams finally took the field, A-E’s troubles began almost immediately. Numerous turnovers, along with explosive offense from Webb gave the Spartans an easy 48-14 win.

The miscues started right away for the Roadrunners (0-1). A botched snap on the game’s first possession gave Webb the ball on A-E’s’ 10-yard line. On their first play from scrimmage, Spartan running back Elijah Bane took it in for the score, and with fewer than two minutes gone in the game, the Spartans led 7-0.

A-E gave the ball right back to Webb on its next possession. Another fumble was covered by the Spartans on A-E’s 41-yard line. On first and 10 on the 30, senior quarterback Joseph Moore found junior running back Garrett Carnathan for a touchdown. Midway through the first Webb led 14-0, and they were just getting started.

After a Roadrunner punt, Webb took over on their own 28 early in the second quarter. Charlie Robinson replaced Moore and drove the team down to the A-E eight. With about seven minutes left, Robinson ran it in from there, and the Spartan lead was now 21-0.

Webb (1-0) wasn’t finished for the half. On its next possession, on second and goal from the 11, Robinson hit Bane for a touchdown, pushing the lead to 28-0.

A-E finally showed some life late in the half. Quarterback Leshaud Holloway scrambled for 27 yards to midfield, but got hurt on the tackle. He was replaced by receiver Keon Smith, who hit Zeke Nfabyyunba for a 31-yard score with six seconds left. The two-point attempt failed, and the half ended 28-6, Webb. A-E at least had a little momentum going into half.

The Roadrunners desperately needed to sustain that surge but were unable to. A punt gave the Spartans the ball on their own 46. Robinson drove them to the A-E three, where Bane took it in for his third touchdown. With 4:52 left in the third, the score was now 35-6, and the game was long over.

Robinson made it 41-6 with an 11-yard run before the third period ended, triggering a continuous clock, and raising the possibility of calling the game after three quarters. The game was played out in full.

The Roadrunners got their second touchdown in the fourth when Smith, still at quarterback, scored on a 28-yard run. Webb then ran out the clock.