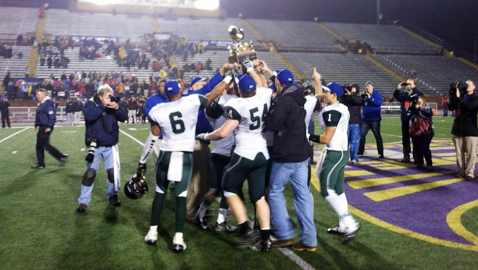 David Meske has been the head coach at Webb School for the past 29 years.

On Thursday, December 5th, Meske added to his impressive resume.

Webb beat St. George’s Independent School 28-14 to win the Division II Class A championship.  It is the sixth state championship for Meske and the seventh in Spartans history.

It is also the Spartans second straight championship and fourth since 2009.

The game could not have started any better for the Spartans.  The defense forced a three and out and then future Tennessee Vol Todd Kelly Jr. took the pitch on the left side, found a hole up the middle, gave a stiff arm to St. George’s Derek Dixon, and was gone.  62 yards later, Webb had a 6-0 lead with 9:26 to go in the first quarter.

On the Spartans third offensive possession, Kelly once again found the end zone.  This time it was a 27 yard run to the end zone.  Kelly also caught a pass from quarterback Johnny Chun for the two point conversion, and it was 14-0 Webb with 3:13 to go in the first.

At this point it looked like the Spartans were going to run away and coast to victory.  But the Gryphons (9-4) had other ideas.

With just over a minute left in the first half and St. George’s trailing 14-6, the Gryphons went for the big play on 3rd and 10.  Dean Brown looked for Corey Jones down the left sideline, who was covered tightly by Wrinn Alexander.  But the pass and the catch were perfect.  Jones shook free from Alexander, and the 74 yard play resulted in a touchdown.

They picked up the two point conversion as well, and the game was tied at 14 at intermission.

Most of the third quarter was a defensive battle.  And with less than four minutes to go in the third, Webb senior Matthew Melton made the biggest play of the game, jumping in front of a pass by Brown, and making a key interception inside his own 10 yard line.

From there, momentum would be on the Spartans side.

Webb (11-2) would go on a seven play, 66 yard drive that lasted just over three minutes.  Robby Strachan would carry four times for 26 yards. Kelly would get two carries for 14 yards, and Melton finished it off with a 26 yard end around to the left side.  And with 38 seconds to go in the third quarter, Webb was back in front 21-14.

But the Gryphons weren’t done.  They moved the football into Webb territory, and faced 4th and 1 from the Spartans 45.  The give was to Clay Crenshaw.  Brant Mitchell raced to the middle of the line, forcing Crenshaw to the left side, where Gage Thompson was there to meet him.

With 8:58 to go, the Spartans started the drive that would wrap up the championship.  It started with a 35 yard run from Kelly, and end with an eight yard run by Kelly, and with 7:12 remaining, Webb led 28-14.

And that would be your final score.

Todd Kelly Jr. was named Offensive MVP thanks to his 248 rushing yards and three touchdowns.  Matthew Melton picked up Defensive MVP honors with his key interception and 4.5 tackles.