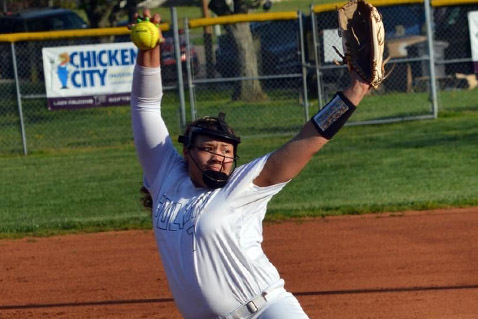 Lindy Webber helped improve Fulton’s softball program significantly in her prep career as a standout pitcher, while the Falcons’ Seth Vaughn was a beast when it came to football and wrestling.

They have been named the FHS female and male Student-Athletes of the Year and will be continuing their education and athletic careers on full college scholarships.

Webber will be going to Johnson University, while Vaughn will be heading to Cookeville, where he will play for the Tennessee Tech Golden Eagles on the gridiron.

In addition to their athletic prowess, both were well-liked and respected by the student body.

“Seth Vaughn was one of the best defensive linemen I have seen in Knoxville in quite some time,” said Fulton Athletic Director Jody Wright. “He is strong as an ox and literally impossible to block.

“However, in school he was the gentle giant. He would amble down the hall never seeing a stranger with his Seth Vaughn coolness, which made him relate to almost every kid at Fulton High School. He was liked and respected by all his peers.”

“Lindy was a softball sensation from the first day she walked in the doors at Fulton,” he said. “She got better and better every year with a work ethic that had no rival. She worked hard and became a dominating pitcher.

“Lindy’s teachers and fellow students reveled in her success because she is such a likable, humble young lady. You see her walk down the hall or in the cafeteria and you would never know she is one of the top pitchers in Knoxville.”

Webber made the All-District and All-District tournament teams and surpassed 500 strikeouts in her prep career.

Vaughn, a 6-2, 287-pound tackle, was the Region 2-4A Defensive Player of the Year and earned All-State honors.

Seth also finished second in the state on the mat in his weight class after winning region and sub-state championships as a wrestler his senior year.