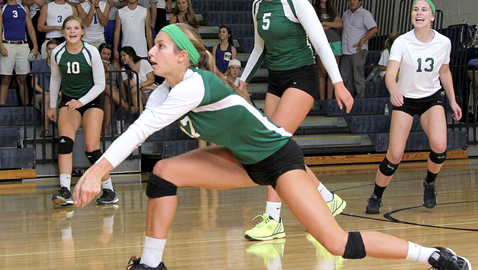 There will be a lot of sunshine in Frances Harrison’s future.

Webb School’s female Student-Athlete of the Year for 2015-16 signed scholarship papers last November to play beach volleyball at the University of South Carolina.

In Harrison the Gamecocks are getting a 5-foot-10 outside hitter who was a record-setting player in her four years at Webb.

The four-time All-Stater played on three straight Division II-A state championship teams and was MVP of the 2015 state tournament.

Harrison also excelled in academics, recording a 3.97 grade point average, and was a Peer Advisor from the 10th grade through the 12th grade.

After her signing, South Carolina Coach Moritz Moritz said: “Frankie is athletic and super competitive, she comes from a well-trained background, and she played lots of different sports so she’s well-rounded but has a real knack for the beach game. She has a great personality and is hard-working – going to school, playing club ball, and working in her dad’s restaurant. She will grind and work to find success.”

South Carolina ranked No. 20 in the final DiG Magazine collegiate beach volleyball poll of the 2016 season. The Gamecocks finished their third season 20-16 overall and defeated a Top 10 ranked team for the first time when they dropped No.10 Florida International 4-1 in the semifinals of the CCSA Conference tournament.

Connor Jacobs is Webb’s male honoree. A four-year starter and multiple All-State performer, he had 22 goals and 11 assists as the Spartans repeated as Division II-A state champs this past season. He will continue his soccer career at Johns Hopkins University in Baltimore.

During his distinguished prep career, Jacobs, who had a 4.37 GPA, was selected for Youth Leadership Knoxville program. He also was Student Council Community Service representative and recipient of Webb’s 2016 Warren Heiser Award, which recognizes a male scholar-athlete.

Derek Flatford and Madison McCoy were named Anderson County High School’s Student-Athletes of the Year by Athletic Director Gary Terry after both competed in the Class AAA state track and field meet at TSSAA’s Spring Fling in Murfreesboro.

McCoy placed fifth in the discus event with a throw of 120 feet, 8 inches.