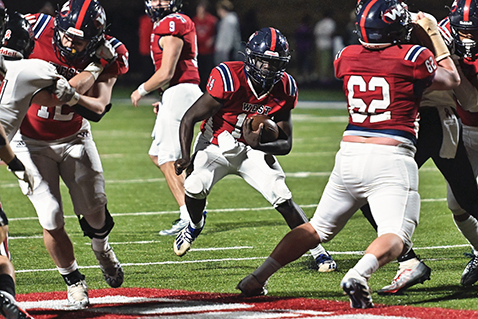 The Maryville Streak is over. Thank you West High Rebels.

Knox County teams had lost 105 games in a row to Maryville, but Coach Lamar Brown’s team put an end to that Friday night with a 31-18 win over the Rebels from Blount County at Bill Wilson Field. The losing streak dated back to the 2000 season.

With that annoying item checked off, West can now focus on more important things.

Next on the list is the Region 2-5A title. West and Central will battle for that in the regular season finale Friday night in Fountain City.

That’s as far as Brown and his team are looking ahead to at the moment.

A Central win over West would give the Bobcats the region crown based on the tie-breaker. West, however, is a heavy favorite on paper.

“It was two really good football teams,” said Coach Brown after the win over Maryville, which came into the non-region showdown ranked No. 4 in Class 6A. “I was proud of our kids. We hadn’t beat them in I don’t know how many years.

“We fell behind early and then we came back and scored 17 straight points. I thought that was really a big part of the ball game.”

Noah Vaughn raced 13 yards around the left side to score the game’s first touchdown midway through the opening quarter. Jaqurius Wrenn blocked the PAT attempt, leaving West’s deficit at 6-0.

West running back Brayden Latham immediately gave his team a shot in the arm with an explosive 21-yard gain around left end and scored seven plays later on a 41-yard escape around the other side. Tyson Siebe’s PAT gave the home team a 7-6 lead.

Knox County’s Rebels would never trail, but Maryville made it a game despite adversity.

West capitalized on the turnover as Latham broke through defenders on a 30-yard TD gallop early in the second quarter to make it 14-6.

Vaughn, who has committed to sign with Virginia, suffered a leg injury on the ensuing kickoff return and had to be helped off the field. He never returned.

Gage LaDue took over the running back duties for Maryville and was quite productive. He pulled out of a tackler’s grasp and raced 45 yards to score with 3:19 left in the first half. Matthew Clemmer’s two-point pass attempt fell incomplete.

With West’s lead only five points, Latham broke loose on a 76-yard TD run after intermission and Siebe’s kick made it 24-12.

Maryville fought back and LaDue carried the ball on 14 out of 15 plays and scored up the middle on an 8-yard run. Again the PAT attempt was blocked by Wrenn, leaving West ahead by six points (24-18).

Maryville executed an onside kick and West thought it had been awarded possession, but after a lengthy delay, the referee signaled it was Maryville’s ball.

A key interception by Anderson Smith got the ball back for West.

In the fourth quarter, Maryville drove to the West 47-yard line and had a third-and-three situation. This time LaDue was dropped for a 3-yard loss by Jamir Turner and John Sartelle and Maryville was forced to punt after being flagged for a delay of game penalty.

Maryville marched to the West 33, but Clemmer was sacked for a 12-yard loss by Smith on fourth-and-five.

Maryville senior linebacker Peyton Cooper said after the game: “I felt like it was evenly matched and a hard fought game. Both teams had a great offense and defense. A good job to them for playing harder. They wanted it more.”

Cooper said he was aware of the long winning streak over Knox County teams.

“I learned about it before the game,” he said. “It hurts, it does. As a team, it hurts to level off history a little bit.

“It’s painful. But we’re willing to bounce back and nobody is going to remember this when we make our run in the playoffs.”