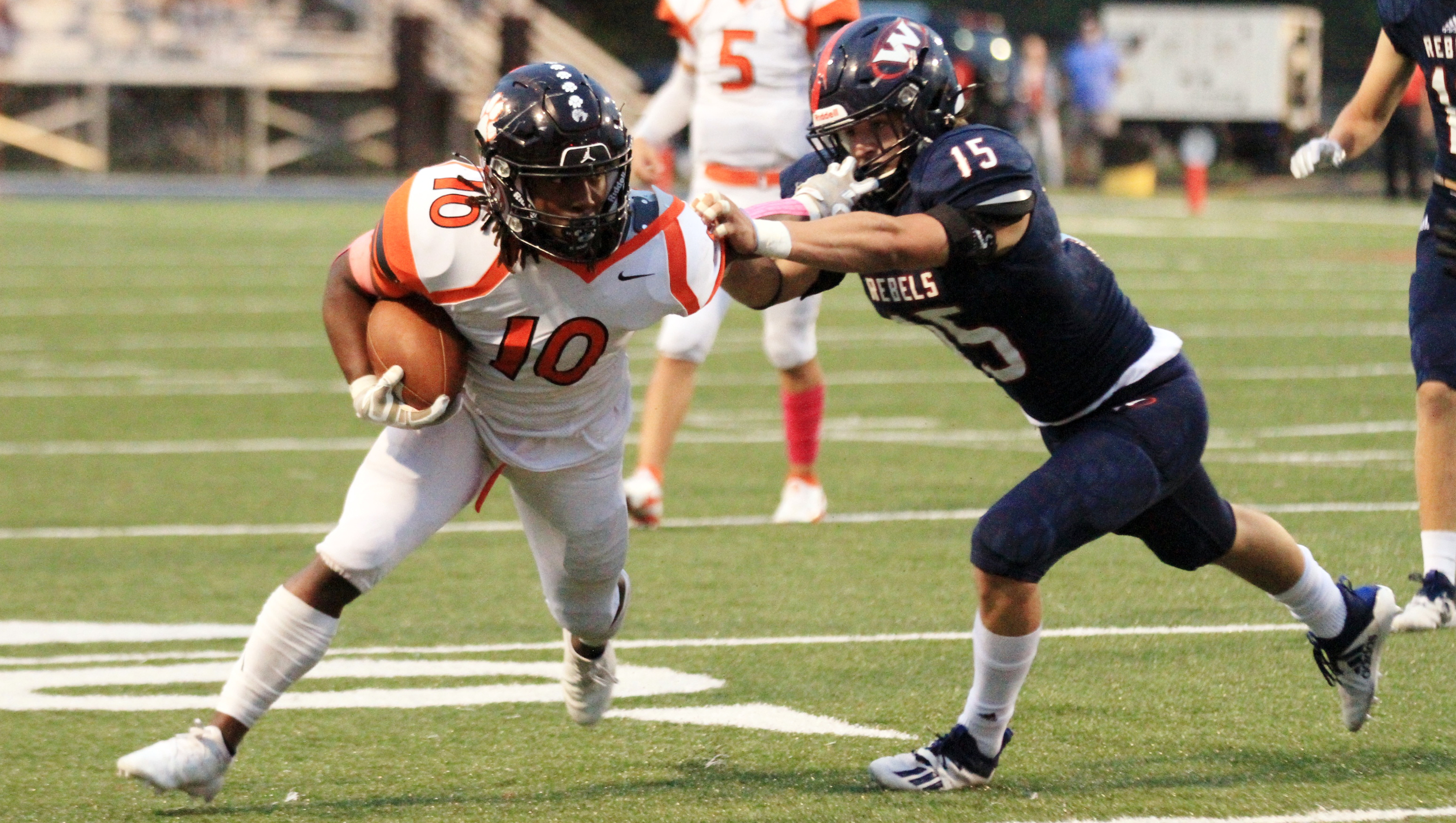 It was a matchup that could have easily been a state playoff game.  And the game lived up to the hype.

On Thursday, October 9, the West Rebels knocked off Region 3-5A rival Powell 39-27, in a game filled with big plays for both teams.

“I was really proud of the way our kids played,” said West head coach Lamar Brown. “We knew it was going to be a fight going into it. Powell is a really good football team and we knew we would have to play for 48 minutes.  Our kids kept playing and when we had opportunities to make plays we did.”

Both teams swapped interceptions in the opening two plays of the game. It was after that when the visitors struck first.  Powell quarterback Jordyn Potts found Jayden Collins on a nine-yard touchdown pass midway through the first quarter, and it was 7-0 Powell.

The Rebels responded. Running back Isaiah Mattress took the pitch, cut back to the middle of the field, and sprinted 56 yards down to the Panthers two-yard line. He’d muscle his way into the end zone on the next play, making it a 7-6 game.

On the Rebels next possession, that explosive ground game was on display once again. This time it was Tre’Von Barfield outrunning the Panthers defense, sprinting 68 yards to the end zone. West was now on top 13-7.

Powell (7-1, 4-1 Region in 3-5A) fought back. On the first play of the second quarter, the Panthers faced fourth and 17 from the Rebels 42-yard line.  The Potts to Collins combination worked to perfection, as Potts heaved the football down the sideline, finding Collins in stride for a touchdown.  That made it 14-13 Panthers.

But the next couple of quarters belonged to the home team. First, quarterback Baker Dance found Armoni Hicks for a 10-yard touchdown pass off a beautiful play action fake. That made it 19-14 West.  On their next possession, West moved the football down the field. Dance was looking to throw on first and goal from the three-yard line. He decided to run, broke a tackle, then dove into the end zone.

In the third quarter, West (8-0, 4-0 in Region 3-5A) forced Powell to turn the football over on downs at midfield.  The Rebels later converted on fourth and 3 at the Panthers 22 with a punishing Mattress run. A few plays after that, Mattress scored from the two-yard line, and it was 32-14 West.

“He’s a great tailback and has been playing with us for three years,” said Brown. “We have three or four great tailbacks and they all bring something to the table. Isaiah brings speed and power.  He runs hard and when he gets into the open field, he has enough speed to score.”

Powell wasn’t ready to lay down. Potts found Gianni Magdos on a 14-yard touchdown pass, and it was 32-21 late in the third quarter. Then with 8:15 remaining in the game, Potts ran it in from four yards out, and suddenly it was 32-27.  Powell was within a score.

With less than four minutes to go, the Panthers took over on their own four-yard line. They’d need a 96-yard touchdown drive to win the game.  Instead, it was the West defense closing the door. Potts was under pressure, tried to shovel the football to a white jersey, but the blue jersey of Ethan Scott stepped in front of the pass at the five-yard line. He skipped over the goal line for the touchdown to bring the lead to 39-27.

An Andrew Gilbert sack of Potts deep in West territory with just over a minute remaining sealed the deal. It was his fifth sack of the game.

Last year Powell edged West in the regular season, only to see the Rebels get their revenge with a victory of their own in the postseason. Should these teams match up in the playoffs again this year, the Panthers hope that pattern continues.

“There’s a lot of great 5A teams that can beat you on any given night,” said Brown. “Nobody is guaranteed to advance in the playoffs.”

The next game for West comes on Friday night when they host Fulton. As for Powell, they’ll travel to Oak Ridge to face the Wildcats on October 23.