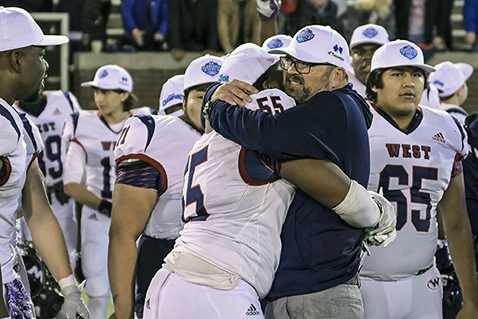 The West Rebels dotted the ‘i’ in champions and crossed the ‘t’ in perfect Friday night.

Those were the final touches as they wrapped up The BlueCross Bowl’s Class 5A state championship and the first 15-0 record in school history with a 47-13 win over Page High of Franklin at Finley Stadium in Chattanooga.

“I’ve been at West since I was a freshman and we lost in the semifinals, quarterfinals and semifinals, so we’ve been right on the grasp of getting that state championship all along,” said Tyson Siebe, the team’s talented place-kicker and a senior leader. “It’s amazing that we came here, the first year here, and won it so big.”

After a scoreless first quarter, the Rebels built a 26-13 halftime lead and pulled away after intermission.

“I thought it was a total team effort,” said West Head Coach Lamar Brown. “We were able to flip the field with some punt returns and do some stuff defensively after a couple of miscommunications.

“I’m really happy for these kids first of all,” added Brown, with a touch of emotion surfacing in his comments. “They have put in the work to win this and done an unbelievable job.”

Senior quarterback Carson Jessie was named the game’s “Most Outstanding Player” after passing for 286 yards and four touchdowns on 18 of 24 completions and one interception.

“All the credit goes to my offensive line and the receivers who catch the ball,” said Jessie. “I wouldn’t be anything without them. I just put the ball out there and they make plays for me.”

Carson said he was “very surprised” he got the award.

As for the team’s performance, Jessie said: “We played great. We came out in the second quarter and played strong. It was awesome.

“Offensively (in the second half), we had them where we wanted them. We had them at their breaking point.”

Brayden’s twin brother Cayden also had an excellent game, catching four passes for 66 yards and one TD. He also intercepted a pass.

Page (12-3) led twice in the second quarter. Quarterback Colin Hurd’s six-yard run and Ethan Lisman’s PAT kick put the Patriots on top 7-6. Hurd connected with Max Collins for a 69-yard scoring play as Page slipped ahead again 13-12 with 4:49 to go in the first half.

The Latham brothers produced all three of the Rebels’ second-half touchdowns, with Brayden scoring on runs of eight and 33 yards and Cayden getting past the Page secondary for a 36-yard catch-and-run for the game’s final score with 6:43 remaining.

Page Coach Charles Rathbone felt West’s “speed on the edge” was the difference in the game.

“We weren’t able to wrap up their speed on the edge,” he said. “They were tough to tackle.

“I felt we played pretty well inside,” added Rathbone, whose team lost to Powell in last year’s state title game.

“West had a good game plan and we didn’t execute well on offense. But credit to them, they did a good job.

“Yes, I would say they are the best team we have played (this season).”