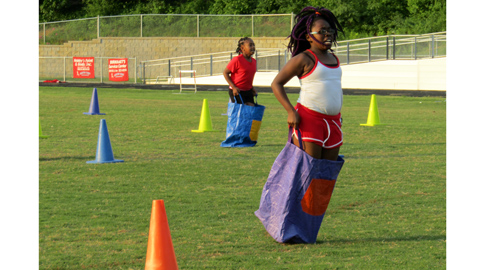 There wasn’t a ball in sight, but the City of Knoxville’s After School Program Track Meet offered plenty of athletic competition Wednesday, May 10, at Austin-East High School.

Boys and girls ages 6 to 14 from nine different recreation centers came together to compete in sprint races and relays, the long jump, tug of war and even old fashion sack races.

More than 180 youth in all from the After School Program competed in the event that was hosted by Knoxville Youth Athletics.

“This is an end-of-the-year experience we are providing for our youth that gives them a taste of competition with opponents from other parts of town,” said Parks and Recreation Deputy Director Aaron Browning.

The city’s After School Program is free and hosts between 500 and 600 children between the ages of 6 and 12 each year from August to May.

“Kids at each recreation center started focusing on an event a couple of weeks ago in preparation for this meet,” added Browning. “It’s our third year partnering with Knoxville Youth Athletics.”

Browning pointed out a dozen or so recreation commissions already are involved in football, basketball and baseball.

“We want to give kids the opportunity of trying something different they may fall in love with,” said Browning. “Activities like track and field, cross country, jumping rope, swimming and tennis.”

“We’ve got some athletic kids and kids who are having fun,” said Browning. “Whether they are finishing first or not first, they’re having a good time.”

Beth Field, Recreation Outreach Coordinator for City of Knoxville, said she saw two kids from different recreation centers who had taken swim lessons together reunite at the city-wide event.

“Just seeing that connection that they wouldn’t otherwise have – to me that’s the neatest thing about it,” said Field.

“My role is to expose kids all over the City of Knoxville to any and every kind of non-traditional recreational activity and that’s pretty much anything that’s not baseball, basketball, football or softball.

“Just this spring I’ve done swimming, jump roping, track meet and soccer. In the fall we had an outdoor camp that included hiking and canoeing.”

Browning said the City of Knoxville this spring transported kids from rec centers to an indoor pool to learn how to swim, to a “Rally Cats” tennis program and to participate in a Jump Rope program with international champion Nick Woodard.

A Jump Rope Showcase, added Browning, is scheduled for Wednesday, May 17, at the EV Davidson Rec Center starting at 4:30 p.m.

For more information about youth recreational opportunities in the City of Knoxville, call 215-1700 or go to knoxvilletn.gov/recreation.