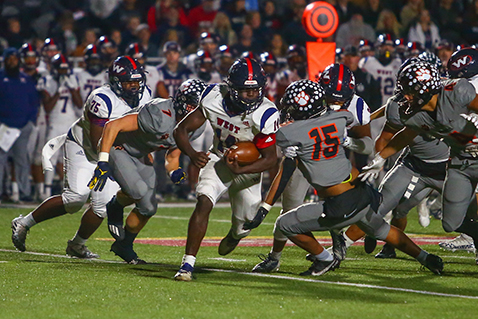 It was a showdown that could have went either way.

West, however, was the last to score and break the tie and Powell simply ran out of time in the TSSAA Class 5A semifinal battle Friday night in the Jungle.

West’s opponent will be Page, which bowed to Powell in last year’s state title game. The Patriots (12-2) return for another run at the gold football after eliminating Henry County 27-24.

“I felt like our kids kept fighting tonight,” said West Coach Lamar Brown, who has guided the Rebels (14-0) to the semifinals twice and the quarterfinals once over the past three seasons. “We didn’t play our best ball game tonight and a lot of that is because of Powell. But we kept fighting and kept making plays when we needed them.

“It was a total team effort,” added Brown, noting that the Rebels had a punt return and interception return for two of their touchdowns. “And an unbelievable drive by the offense to close the game out.”

The Panthers rallied from a 21-6 deficit to tie the score on quarterback Jordyn Potts’ keeper around left end with 5:21 remaining in the contest.

But West marched 55 yards and regained the lead when senior tight end RJ Brooks pulled in a five-yard pass from quarterback Carson Jessie. Tyson Siebe’s PAT kick made it 28-21 with 0:46 on the clock.

Brooks said the go-ahead play, called “knicks, is where I line up and run the back side of the line and to the flat, where nobody should be.”

The play is similar to a down-and-out. “That’s pretty much what it is,” said RJ.

“It’s a good feeling,” added Brooks, regarding his go-ahead catch. “I’m just super proud of this team. We’ve accomplished a lot through this year.”

Some had called the West-Powell contest a de facto state championship game.

Brooks isn’t buying that. “Naw, not at all,” he said. “We’ve always said we’ve got to go one week at a time and that’s what we have to do.”

Ayden Greene’s 15-yard pass from Potts gave Powell a 6-0 lead at the start. Before the first quarter ended, Devin Jamison scored on a 16-yard run and Siebe’s PAT put West ahead 7-6.

The scored remained that way through the second quarter.

JaQurius Wrenn’s 48-yard punt return and Marshaun Bowers’ interception return of over 100 yards out of the Panthers’ end zone gave the Rebels their 21-6 lead in the third quarter.

But the Panthers kept fighting.

Potts’ 3-yard touchdown run and 2-point conversion run cut the deficit to 21-14 with 3:46 left in the third quarter.

After Potts’ second TD run tied the score, West running back Brayden Latham went to work on the ground. A pass interference call on Powell moved the ball to the Panthers’ 18-yard line with 1:07 remaining.

On the next play, Latham rushed for five yards and a facemask penalty by Powell on the play moved the ball to the 7. On first-and-goal, Latham gained two yards to the 5. After a Powell timeout with 0:52 on the clock, West scored on Jessie’s pass to Brooks.

With under a minute remaining, Potts was able to connect with Gianni Magdos for a 19-yard gain to the Powell 39. But on the next play, Potts was hit hard by the Rebel defense in the backfield and fumbled. West recovered the ball at the Powell 32 with nine seconds on the clock and took a knee to end the game.

Latham totaled 175 yards rushing on 31 carries, with 145 of those yards coming in the first half.

Potts finished with 252 yards and one touchdown through the air. The Tennessee Tech commit also ran eight times for 56 yards and two TDs. He was sacked four times for 27 yards.

Powell RB Connor Wheeler was limited to 45 yards on 14 attempts by the West defense. He also caught three passes for 27 yards.

“Congratulations to West,” said Powell Coach Matt Lowe. “They did what they needed to do to win it.