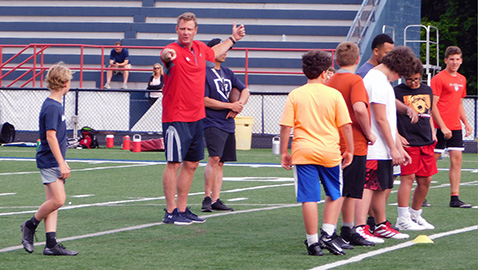 The MAC has picked up a whopper.

The West Youth Football program has joined the MAC, a local middle school football league that had its inaugural season last year.

West has the makings of being a strong addition to the league. Its youth program won 14U and 12U championships last fall in the Knox Metro Youth Football League. John Harrison is its commissioner.

Sixth, seventh and eighth grade players zoned for West High School, who primarily attend the Bearden and Northwest middle schools, will make up the West JV and varsity teams.

The Rebels’ head coach is Jeff Francis, a former UT quarterback who has been coaching in the KMYFL for many years. Francis directed West to the 14U title in 2019, while one of his assistant coaches, Rich DuBon, guided last season’s 12U team to top honors.

Some 40 youngsters had their third preseason workout on the West High field June 16 and will resume practice July 6 after the (TSSAA) Dead Period.

Due to the coronavirus pandemic, Coach Francis said he was “stressing the players to wash their hands.”

Francis’ objective when it comes to middle school football is that vision is more important than victory.

“I feel like at the middle school level the coach’s No.1 job is to give them a vision for playing high school football,” he said. “As a parent, I’m a big believer in high school football and that young men don’t need to have so much idle time. Football is a great way to keep them busy and focused and give them a purpose to play for something bigger.”

Francis also believes his role is to teach the players fundamentals to get them ready for the high school game.

“But more importantly, enjoy the game enough to where they want to play high school football,” he added. “If you win along the way, that’s great.”

Francis said he is hoping to have 60 players for the start of the season.

The MAC was formed primarily because there hadn’t been school sponsored teams in Knox County since the defunct Knoxville city school system funded junior high football teams in the 1980s.

The West middle school team will be a feeder program for West High.

“I am really excited about us moving to the MAC,” said West High Coach Lamar Brown. “I think the kids are excited because they get to play on the high school field. It gives our community a chance to come out and support the kids.”

Junior varsity and varsity games will be played on Thursday nights at 6:30 and 8, starting Aug. 6.

West will open at home against Gibbs. Other season openers include Halls at Karns, Hardin Valley at Bearden and Alcoa at Carter. Farragut has an open date Week 1 and plays at Halls in Week 2.