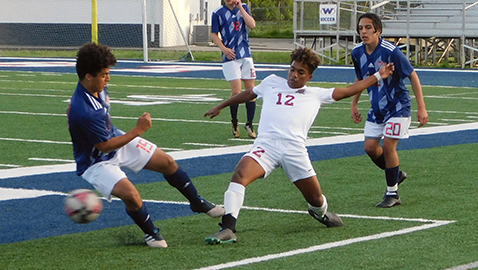 West High is having one of its best seasons in boys soccer, but learned last week it has to be on top of its game to come out a winner.

Oak Ridge, led by freshman goalkeeper Bryson Brown’s 12 saves, handed the Rebels a 1-0 loss April 16 at Bill Wilson Field. The victory lifted the Wildcats to 5-6-1, while West slipped to 12-2-1.

Oak Ridge Coach Tom Gorman said it was his young team’s biggest win of the year by far.

“It’s been a little bit of a rough go this season as we learn and grow,” said Gorman after his team pulled off the upset.

“West is a really solid team,” he added. “They always are. This has been a rivalry game. We’re in the same region … so we knew it was going to be a fierce battle. I’m just proud of the guys that they finally put together 80 minutes.”

“I think he just had a solid first touch and was able to get behind the guy,” said Gorman. “Their goalkeeper (senior Carter McAdoo) is great. Steven shot it right in the back post and I think he put it in the only place where he could have scored.”

Most of the first half was played on West’s offensive end, but the Rebels misfired several times and Brown had an outstanding performance guarding the net.

“This was the first game where he’s put it all together,” said Gorman. “He made the big plays but also didn’t make a silly mistake as a freshman tends to do.”

West Coach Alex Walls felt the difference in the game was not matching Oak Ridge’s energy.

“They came out with pretty good energy and we didn’t match it,” he said. “We had a slow start and were sluggish the whole game.”

The Rebels, however, tested the Wildcats’ rookie goalkeeper early and often.

“I kind of expect that,” said Walls. “We’ve got a really good team. We had plenty of opportunities we didn’t capitalize on.

“It’s disappointing at home. They’re the ones that had a bus trip and a broken down bus, yet I felt like – like the old saying – we didn’t get off the bus.”

Oak Ridge arrived late, delaying the start of the junior varsity match and the varsity contest that followed.

The Rebels’ warm-up also was affected by the delay. “Maybe that had a little to do with it,” added Walls.

Despite the defeat, the West coach said “the potential is unlimited” for his squad this season. “There are a lot of things we’ve got to do better. We have to look at tonight, learn from it and see how we respond.”

The Rebels bounced back Thursday with a 1-0 win at South-Doyle. Senior Marc Scherer scored the winning goal in the 78th minute.

The Rebels will be at home Tuesday night at 7 against rival Bearden (10-1).

West has scored 58 goals this season while allowing only nine. The only other blemishes on its record are a 3-2 loss to Farragut and a scoreless tie with Lenoir City.