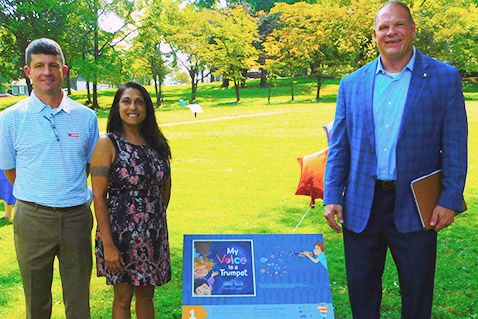 Storybook Trails are popular in Tennessee State Parks and here and there in smaller cities and county parks. The trails encourage parents and small children to take a brief walk and read a children’s book together along the way as they pass illustrated pages posted along the route.

Knoxville and Knox County now has their first Storybook Trail and others are planned with the idea of rotating the stories from park to park seasonally.  Two more are planned at Ijams Nature Center’s Universal Trail and at Collier Preserve.  Knox County Public Library hosted the opening of the new Storybook Trail Friday in West View Park at 2950 Keith Avenue, a five plus acre city park.

This fall more Storybook Trails will be opened.

Storybook Trails are funded by the Governor’s Early Literacy Foundation, Friends of the Knox County Library, city council members, Wal-Mart Store 1318 and Sam’s Club 8256. Mayor Jacobs said the Storybook trails links with his ReadCityUSA campaign where the community is encouraged to read for about 20 minutes each day and discover historic sites, museums and other cultural riches in their own backyard.

Friends of the Library provided a free book to each West View Elementary student who attended the storybook trail’s opening.