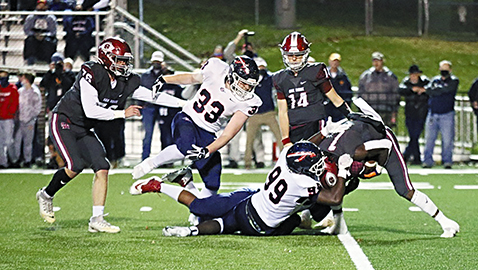 South-Doyle’s new wildcat formation may have been potent against Central in the quarterfinals, but it wasn’t effective against Oak Ridge Friday night.

The host Wildcats, who scored 31 points in their quarterfinal win at West, showed they could play defense too as they shut out the Cherokees 14-0 in the TSSAA Class 5A semifinals.

Oak Ridge advances to play Summitt for the gold football in the BlueCross Bowl title game Friday at 7 (CST).

Quarterback Mitchell Gibbons had a hand in both TDs. He hit Cole Adams with a four-yard scoring pass to cash in Jacob Berven’s fumble recovery at the S-D 19-yard line on the game’s opening possession.

Gibbons’ 37-yard keeper on third-and-20 gave the Wildcats a two-score lead with 5:27 left in the contest.

The key to the win, though, said OR Coach Joe Gaddis was: “Our defense, period. Our defense was incredible.”

South-Doyle got inside the OR 30 three times but never closer than the 27.

“We deserved to be here,” said S-D Coach Clark Duncan. “We played hard. We just couldn’t find a way to establish our run game. They did a great job stopping us.”

Preston Sisler was a two-way standout for S-D, with five catches for 96 yards. He also led the defense, along with Terrell Brown and TaShawn Patrick.