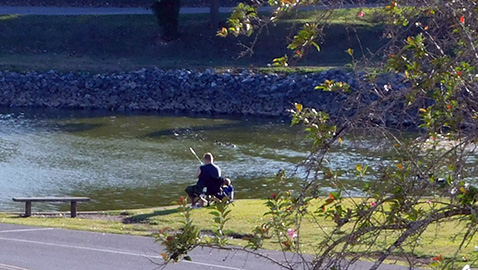 Study shows up to $111M needed to update park

Most people who have visited Chilhowee Park and Exhibition Center in recent years know that the 81-acre East Knoxville complex needs work. Options for the future of the often unused park are before the city now as a study by a consulting firm, Conventions, Sports and Leisure International (CSL), was made public Wednesday evening at the Jacobs Building at the park.

A sizable crowd turned out to hear Chip Barry, Knoxville’s Deputy Chief of Operations, introduce representatives of the consulting firm.  The biggest surprise recommendation by the firm is the suggestion that the Tennessee Valley Fair should be relocated somewhere other than Chilhowee Park.

The cost of a total rebuild of Chilhowee Park was estimated to cost from $81 to $111 million.

CSL and Barry said the first priority, before anything should be done, is to fix the flooding problem there. Barry stressed that the recommendations by the consultants do not include solving the flood but look beyond a yet-unresolved problem, to what could be changed at the park.

CSL’s Bill Kruger said that Chilhowee Park is ideal for holding events that could not be held any place else in Knoxville. He described the park, including Zoo Knoxville located next door, as a destination and very important to the surrounding neighborhoods.

An ongoing public survey of ideas and on-site study came up with possible changes at the park including adding more greenspace, expanding the lake, creating year-round events, honoring the park’s history and making the park more neighborhood accessible.  Kruger said that existing buildings  have aging problems with long lists of deficiencies. He said the amphitheater needs to be replaced. He said the Jacobs Building is limited in space and use.

CSL recommending renovating the park to create new event facilities, seeking out private business partners and a possible mixed-use development that would include offices, restaurants and residential housing.

A new amphitheater, to seat 3,500 attendees, could be built facing the lake with hillside open lawn seating that could accommodate up to 7,500 people.

Building a new multi-use facility of at least 30,000 square feet was suggested as well as turning over the Jacobs Building to a private investor for use.

The group said the current park has too much paved area when it should have up to 50% greenspace and water. Other ideas include commercial buildings and a farmer’s market along Magnolia Avenue, a new building for park administration, and a new pavilion.

Finding a new area for the fair, estimated at needing 90 to 100 acres in the city, is estimated to cost $20 to $25 million. The renovations, repairs and upkeep for the existing park over the next three year period was estimated at $3,490,000

Barry stressed that there’s no plan adopted by the city at present. He urged the public to respond with ideas to www.knoxvilletn.gov\chilhoweeplan.

Public comments at the meeting included one citizen calling the proposals “a pipe dream.”

The CSL consult cost the city $200,000 and the firm was hired after a request for proposal. CSL has a history of similar studies across the nation. The Knoxville study began in February with several meetings and opportunities for public comments.