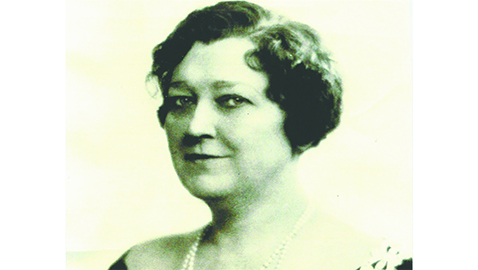 Willa Blake Eslick was the first woman ever to be elected to Congress from the State of Tennessee.  Mrs. Eslick served only an abbreviated term in the U. S. House of Representatives and was elected following the death of her husband, Congressman Edward E. Eslick.

Willa Blake was born on September 8, 1878 in Fayetteville, Tennessee, the daughter of G. W. and Eliza Blake.  Willa was the eighth child born to her parents.  Evidently the Blake family was rather well-to-do, as Willa received quite an education for a young woman of the time.

Willa Blake attended private schools before enrolling in Dick White College and later Milton College.  Miss Blake also attended the Winthrop Model School, which later became the Peabody Demonstration School and eventually the University School of Nashville.  She went on to study briefly at the Metropolitan College of Music in New York City, which was the first time Willa Blake had ever left Tennessee.

Apparently, Willa Blake was not only an accomplished young woman, but an unusual one, as she became quite interested in politics.

Miss Blake was a member of the Tennessee Democratic Committee.  She met and married Edward E. Eslick, a young attorney from a prominent family in Pulaski, Tennessee, in 1906.  Eslick was thirty-four years old when they married and Willa was twenty-eight.  It was very unusual at that time for a woman to marry that late in life.  Willa Blake Eslick was clearly not a woman to be bound by tradition.

During World War I, Edward Eslick, a tall and scholarly man, worked as an appeal agent for the federal government in Giles County.

By 1924 he challenged incumbent Congressman William C. Salmon for his seat in Congress.  It was a heated race with at least three serious contenders; Congressman Salmon, E. E. Eslick, and Clarence W. Turner, who had served a brief term in Congress.  A fourth candidate, F. S. Hall, ran, but the real race for the Democratic nomination came down to Salmon, Turner, and Eslick.

The district was largely agricultural and sprawled from what are now the Nashville suburbs through Middle Tennessee to West Tennessee.

S. Hall managed to carry only his home county of Dickson; in fact, each of the candidates did well in his respective home county.

Congressman Salmon carried his home county of Maury, although not by a huge majority.  Salmon also carried Lewis and Williamson counties.

Clarence W. Turner carried his home county of Humphreys by a healthy majority, as well as Hickman and Houston counties by lesser majorities.  Edward E. Eslick won only Lawrence and Giles counties, but his majority in his native Giles County was 3,278 votes against his three opponents combined.  It was enough to give him the Democratic nomination with 7,988 votes.

Willa Blake Eslick went to Washington, D. C. with her husband and theirs was very much a political partnership, as well as a marriage.

Willa Eslick was deeply involved in her husband’s career.  Congressman Eslick was strongly supportive of the veterans of World War I.  Those same veterans, with the onset of the Great Depression, were clamoring for a “bonus” to be paid out by the federal government.

Congressman Eslick was on the floor of the House of Representatives on June 14, 1932.  It was a typically humid and hot day in the nation’s Capitol.  Willa Eslick made herself comfortable in the gallery reserved for family members of congressmen.  E. E. Eslick intended to speak in support of the veterans’ bonus bill.

Sponsored by Texas Congressman Wright Patman, the bill called the “World War Adjusted Compensation Act,” provided payments of $1.00 for each day a veteran had served stateside, while those veterans who went overseas were to receive a payment of $1.25 for each day of service.  The payments were capped at $500 for those veterans who served stateside and $625 for those who fought overseas.

The Patman bill provided for immediate payment to those veterans who were due less than $50 and the estates of deceased veterans would receive immediate payment if the total owed was less than $500.  Wright Patman had been trying to pass one version or another of his bill for years and in some instances, veterans were able to borrow against the value of the bonus.  By the summer of 1932, some 2.5 million veterans had borrowed almost $1.4 billion.

Opponents of the bill cited the enormous cost to the federal treasury, but like millions of other Americans, many veterans were desperate and in need of money.

Congressman Eslick took the floor of the House and began an emotionally charged speech.

Eslick tottered and swayed for a moment, clutching at his high and stiff shirt collar.  Then dramatically reaching out a hand in silent appeal, fell over.

Congressman Eslick collapsed in mid-sentence from a heart attack.  Mrs. Eslick promptly fainted when she witnessed her husband tumble to the floor.

Reviving quickly, Willa Eslick hurried down from the gallery to an anteroom just off the House floor where her husband lay and attempted to revive him.  Dr. George Calver, the Capitol physician arrived and rapidly concluded there was nothing to be done to save Congressman Eslick, who died moments later.

Mrs. Eslick was still in shock over the death of her husband when only days later Democrats inside her district suggested she become a candidate for Congress in a special August election to fill out the remainder of Congressman Eslick’s term.

William Fry, nominally a Tennessee lawyer and active Democrat who had been the Secretary to Congressman Lemuel P. Padgett (and would later work for Senator McKellar as a staff member), was especially active in attempting to recruit Mrs. Eslick to become a candidate.  Finally, Willa Blake Eslick agreed to run.

Three opponents challenged Mrs. Eslick in the primary, but she won with an absolute majority to become the first woman ever elected to Congress from Tennessee.

Congress was not in session when Mrs. Eslick was elected and her official swearing-in ceremony did not take place until December 5, 1932 when the House reconvened.  It was not unusual for the Congress to be in session following the November elections for “lame duck” meetings.  That year Congress was faced with a national debt that was skyrocketing and the deteriorating economy.

Congresswoman Eslick did not merely accept her paycheck and wait for the expiration of her term on March 3, 1933.  She was deeply concerned about the suffering of her constituents, especially the many farm families in her district.

Mrs. Eslick strongly back a plan that would prevent the foreclosure on family farms.  Congresswoman Eslick actually spoke on the floor of the House in favor of the plan.

“There are few comforting words that we who represent agricultural districts may give to our people,” Mrs. Eslick said.  Yet she concluded, “everybody now recognizes that something should be done for them without delay.”

Congresswoman Eslick criticized what she considered the predatory special interests who were hardly the friends of the farmers.  She noted that even the makers of farm equipment “brazenly ask for more tariffs, so that no one can force a moratorium for their excessive costs.  They are the source of much corruption in some parts of the land.  The farmer cannot continue to buy in a protected market and sell in a free one.”

Mrs. Eslick voted for every measure she thought would aid the farmers in her district and was an active member of Congress during her short term of office.  Congresswoman Eslick was especially delighted by President-elect Franklin D. Roosevelt’s proposed plan for the Tennessee Valley.

“For our immediate section of Tennessee, much of the gloom has been lifted by the hope which the President elect has given us,” Mrs. Eslick said.

Congressman Eslick had served on a special committee to investigate subversives and Mrs. Eslick tried to continue her husband’s work.  She advocated harsh penalties for those who sought to undermine the government of the United States.

Willa Blake Eslick’s term had ended before legislation invoking those same harsh penalties was passed by Congress, but approved it was and Mrs. Eslick was delighted when the bill carried her late husband’s name.

Willa Eslick might very well have continued running for Congress, but her husband’s death came after the filing deadline had passed and his Seventh Congressional District had been significantly altered following redistricting.  Clarence W. Turner had filed to run against Congressman Edward E. Eslick in the new Sixth District and won the Democratic nomination without opposition.

As Willa Eslick prepared to end her short time in Congress, Congressman Fritz Langham of Texas paid her special tribute.  While Langham had known Mrs. Eslick as the wife of a colleague and friend, he noted her own accomplishments as a Member of Congress.

Willa Eslick would outlive her husband by almost thirty years.  After completing her term in Congress, Mrs. Eslick returned home to Tennessee.  She continued to live in Pulaski until her death on February 18, 1961 at the age of eighty-two.