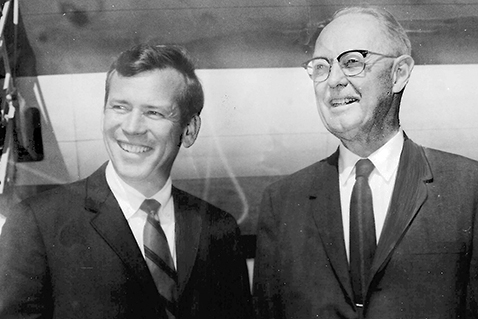 A Republican, Harrison made a name for himself as an opponent of what he termed excessive federal power.  “This is, in my opinion, a serious detriment and threat to local and state initiative and control which are at the very foundation of our freedom and liberty and our free enterprise system,” Harrison said.  The Wyoming State Tribune once pointed out in an editorial that “Bill” Harrison “still owns the all-time record vote total of any candidate for public office in Wyoming.”  The newspaper admitted, “He may be an unspectacular campaigner, but he’s certainly an effective one.”  That was especially important in a sparsely populated state like Wyoming where it was (and still is) crucial for successful candidates to know and meet as many people personally as possible.

William Henry Harrison III, like his grandfather, was from Indiana where he was born to Russell Benjamin Harrison and Mary Saunders Harrison.  Harrison’s parentage was politically prominent on both sides of his family as his mother’s father was Alvin Saunders, a territorial governor of Nebraska and a United States senator from the Cornhusker State.  His great-great-great grandfather, yet another Benjamin Harrison, signed the Declaration of Independence.  Despite his distinguished heritage, Harrison once told an interviewer, “You can’t live on somebody else’s reputation . . . I tried to do what I could by myself.”

Young Harrison’s early career was varied after a childhood divided between Omaha, Nebraska, and Washington, D.C., where he had attended the prestigious Sidwell Friends School.  Harrison was a private during the First World War and later worked as a park ranger at both Yellowstone and Glacier National Parks.  The future congressman also ran his own farm before attending law school.

In 1926, William Henry Harrison followed in the footsteps of his forbearers, going into the family occupation of politics by getting himself elected to the Indiana State House of Representatives from Marion County, which included Indianapolis.  Harrison only served one term as he sought to be elected Marion County Attorney in 1928 and lost.  Harrison’s father served in the Indiana State Senate during the time he served in the House.

William Henry Harrison moved his family to Wyoming in 1937 and by 1944 he was once again running for the House of Representatives, this time in the Cowboy State.  There Harrison purchased a forty-acre ranch on Little Goose Creek in the Big Horn Mountains of Wyoming.

In 1954 Harrison, like many a congressman, had his eye on a seat in the United States Senate.  The idea of running a statewide campaign every two years versus once every six years, not to mention the greater prestige of serving in the U.S. Senate caused Harrison to ponder running.  Yet the congressman didn’t much savor the idea of challenging popular Lester Hunt, a former two-term governor who had unseated GOP incumbent Edward V. Robertson in the 1948 election.  Hunt abruptly announced he would not be a candidate for reelection and later shot himself in his Senate office.  The reason why would make a column in its own right.

William Henry Harrison filed for the Senate seat, intent upon breaking the jinx of a sitting congressman never having been elected to the U.S. Senate from Wyoming.  TIME magazine noted the congressman was “unusually good at keeping his fences mended and running errands for folks back home,” which is almost always a potent formula for a politician to maintain his popularity in his state or district.  While the governor appointed a caretaker to the Senate seat following Lester Hunt’s suicide, Wyoming Democrats recruited the best vote-getter available to them, Joseph C. O’Mahoney.  O’Mahoney served in the United States Senate from 1933 until 1953, after losing reelection in 1952.  The old warhorse answered the bell and the race for the United States Senate in Wyoming became one of the most closely watched in the country during the 1954 election.  The prediction proved accurate as O’Mahoney edged out William Henry Harrison 57,845 votes to 54,407, a difference of 3,438 ballots.

After his loss in the Senate race in 1954, Harrison was appointed to a post in the Federal Housing Administration by President Dwight D. Eisenhower.  The former congressman worked both in Washington, D.C., and Atlanta while employed by the FHA.

Harrison was out of elective office when Congressman Keith Thomson announced he was running for the U.S. Senate to succeed O’Mahoney, who was retiring after having suffered a stroke.  William Henry Harrison quickly announced he was running to reclaim Wyoming’s lone seat in the House of Representatives.  Harrison narrowly won a crowded GOP primary and went on to win the general election.  William Henry Harrison’s toughest opponent for the GOP nomination for congressman-at-large was Kenny Sailors, a former professional basketball player who had served in the Wyoming House of Representatives.  Comebacks are frequently difficult in any profession, but especially so in politics.  In the same election, former Wyoming U.S. Senator Frank A. Barrett was seeking to avenge his 1958 defeat by Gale McGee.  Barrett, who had served as congressman, governor and United States senator from the Cowboy State, was decisively defeated by Congressman-at-large Keith Thomson.  Thomson would go on to easily win the general election but died of a heart attack before he could take office.  Keith Thomson was only forty-one years old.  His widow, Thyra, would prove to be hugely popular, being elected Wyoming’s Secretary of State six times, serving twenty-four years.  Thyra Thomson outlived her husband by more than a half-century.

In Bill Harrison’s own political comeback campaign, the former congressman touted himself as a lawyer, veteran, rancher and legislator.  Harrison utilized a slogan reminding voters, “Experience is Important.”

As the congressman-at-large, Harrison revived his constituent service operation and was easily reelected in 1962, winning better than 60% of the vote.  Democrats were still competitive in Wyoming as evidenced by Gale McGee, who was a member of the thirteen freshmen Democrats elected to the U. S. Senate in 1958.  McGee was reelected in 1964 and 1970.

Congressman Harrison faced a tough challenge from attorney Teno Roncalio in 1964 when the GOP ticket outside the South was dragged down by the nomination of Barry Goldwater.  Lyndon Johnson carried Wyoming and that was enough to tip the balance to Democrat Roncalio who edged out the congressman by 2,211 votes.

Seventy years old in 1966, William Henry Harrison proved, if anything, he was resilient.  The old campaigner announced he was running once again for congressman-at-large as Teno Roncalio was seeking to win a seat in the U.S. Senate that year.  The aging former congressman faced a serious opponent in the primary, but Harrison won, albeit narrowly.  1966 was a good year for most Republicans and William Henry Harrison won his comeback bid by more than 5,500 votes over Democratic candidate Al Christian, who was a young labor leader.

1968 saw the end of William Henry Harrison’s electoral career.  The seventy-two-year-old congressman faced several opponents but stubbornly insisted upon running again.  Harrison’s most formidable opponent was John Wold, a wealthy oil man from Casper.  A former chairman of the Wyoming Republican Party, Wold had been the GOP nominee for the United States Senate against Senator Gale McGee in 1964, so he had name recognition.  Wold was also considerably younger than Congressman Harrison.  Like many a challenger, John Wold criticized the incumbent for coming home to campaign, pointing to Harrison’s missed votes in the House.  Of course, when incumbents stay in Washington to vote on bills, their opponents usually charge them with ignoring the home folks.  Harrison ticked off discrepancies in Wold’s campaign statements about his service to Wyoming and noted the challenger accused him of being old and not providing “vigorous” service to the people because he had been in Wyoming campaigning.  The congressman wryly noted “the latter two of which seem inconsistent.”

Still, William Henry Harrison made a race of it, polling 22,522 votes to 23,590 votes for Wold.  John Wold won the Republican nomination for Wyoming’s lone seat in the House of Representatives by 1,068 votes.  One of John Wold’s chief arguments for displacing Harrison from the House would come back to haunt him in the next election.  Wold argued he was young enough to build seniority in Congress, while the seventy-two-year-old Harrison was clearly limited in that respect.  As it turned out, William Henry Harrison would live for another twenty-two years and John Wold abandoned his seat in the House after a single term to once again run against Senator Gale McGee.  McGee was not at all reluctant to remind voters of John Wold’s argument on why he wished to go to Congress in the first place.  Wold lost to McGee in 1970.  There was some irony in that Teno Roncalio was running for Congress again in 1970 after having only served one term in the House before running for the Senate.

When defeat came, Congressman William Henry Harrison was gracious.  He wished John Wold success in the general election and took pains to express his warm thanks to the thousands of loyal friends who had supported him throughout his career.

Richard Nixon was elected president in 1968 and after taking office, he appointed former congressman William Henry Harrison to the U. S. Renegotiation Board, one of those myriad boards and commissions where a grateful president of the United States can reward his friends and supporters.  The purpose of the board was to study federal contracts concerning national defense and aerospace programs to ensure contractors were not making “excess profits.”  With William Henry Harrison’s longtime preoccupation with federal excess, it was an assignment made for the former congressman.  Of course, Harrison certainly had considerable knowledge of the federal government and a wealth of experience and he resigned from the board when he turned seventy-five, likely as he had qualified for a pension for his time in Congress at that point.  Still, the parsimonious Harrison could boast during his time on the Renegotiation Board, that entity had returned to the federal government in 1971 more than double the excess profits found by the board in the previous fiscal year.  It was the largest amount returned to the government since 1958 and the presidency of Dwight D. Eisenhower.  Since the board’s initial creation, by 1971 it had returned $1 billion to the American taxpayers.

When Harrison announced his resignation from the Renegotiation Board, he told reporters he was merely keeping a promise made to his wife that he would retire once he reached age seventy-five.  The former congressman said his health was good.  Harrison told newsmen he and his wife would spend summers at their home in Sheridan, Wyoming, and then spend the winter in Florida.

For the remainder of his life, Harrison maintained a home in North Redington Beach, Florida, where he sheltered in the sunshine during Wyoming’s harsh and bone-chilling winters.  When the weather warmed up in Wyoming, he returned to his place by the Little Goose Creek.

Bill Harrison died in a hospital in Florida on October 8, 1990, at age ninety-four from heart failure.  Perhaps the former congressman was less a westerner than a middle westerner, but he was a dedicated public servant who loved his adopted state and its people.