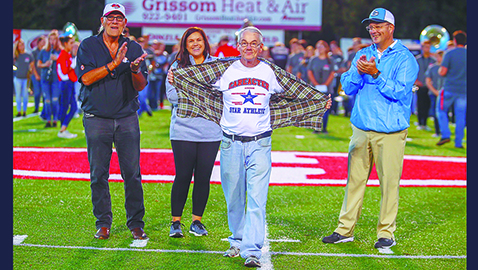 Knoxville Focus sportswriter Steve Williams has a long career and on Friday night, he was honored by Careacter Star, an organization founded in East Tennessee to recognize student-athletes for academics, community service and character.

Williams, who has been with The Focus since 2008, was named Careacter Star Sportswriter of the Year and acknowledged for his work and dedication on the field before Gibbs High’s 24-17 victory over the host Red Devils Friday night.

The Careacter Star Athletes of the Week in Knox County and Seymour are published weekly in the Knoxville Focus during the school year.

The organization also annually recognizes coaches and sportswriters for their contributions to high school athletics. It has its roots in the Volunteer State but is now a national program.

Moore said that Williams was a natural winner for the award because of his tireless efforts over decades of covering high school sports and athletes in East Tennessee.

“I first met Steve years ago when he was working for the Knoxville Journal and I was coaching at Knoxville Catholic,” Moore said. “He’s a great writer, He’s always been fair and that’s not just with my teams.

“It was with other teams. If you read his work and you don’t know him, you know that he cares about people and has a true passion for what he does. He’ll exhaust every avenue and do what he needs to do to get the story that he needs to get.”

Williams’ passion and skill for his craft are undeniable but Moore said that Steve’s personality and character truly set him apart.

“He’s a great writer but he’s also a good man,” said Moore. “I saw his care for the athletes when I first met him.”

Williams, who began his journalism career in his hometown when he was a student at Clinton High School, joined The Knoxville Focus in 2008.

His early days as a sportswriter began at the Clinton Courier-News, which is currently part of the Republic Newspapers Chain. He began working there in 1967.

“I’ve been very blessed to be involved with his school athletics and let me say, that I’m glad that The Focus picked up the ball and started running the Careacter Star Athletes of the Week,” Williams said. “I’m honored to receive this award from the organization.”

Williams, who officiated baseball, softball, football and basketball in the TSSAA, hung up his whistle in 2014 and now devotes his full attention to covering the area’s top games and high school stars.

“I’ve been honored and blessed to be involved in high school athletics for 50 years; it’s a labor of love.”

He relished the opportunities to work in both capacities and continues to pursue his writing with dedication and passion.

While Moore said that the honor was for Williams, the longtime football coach said that he also wants The Knoxville Focus to relish the award.

“The award is for Steve,” Moore said. “He’s extremely deserving and he represents The Focus.

“But it’s for the whole crew at The Focus. I’m extremely pleased that they run our Careacter Star athletes every week. But it’s also for [managing editor] Rose [King]. It’s for [editor] Marianne [Dedmon] and it’s for [Publisher Steve] Hunley.”