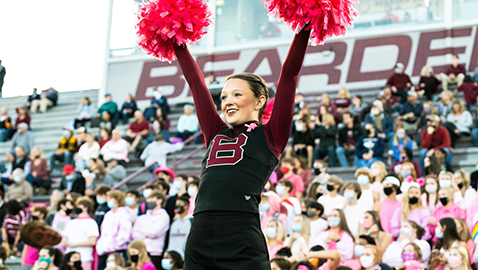 When Bearden High School and Hardin Valley Academy had their annual Region 1-6-A meeting on the gridiron, something had to give.

Both the Bulldogs and Hawks were looking for their first win of a long 2020 season, but on Thursday night, the misery ended — at least temporarily — for the Bulldogs as they found their way into the win column with a 44-20 victory Thursday night at Bill Young Field before a big crowd and a local television audience.

Bearden coach Morgan Shinlever said that his team, which improved to 1-5 overall and 1-1 in the region, can now focus on the rest of the 2020 campaign, which has been packed with adversity. The Bulldogs had to forfeit their game against rival West High as the team had to shut down practice for two weeks before the season even started.

“This feels good and we can build on this,” Shinlever said. “We have a lot more football to play and the good thing is that all of these games are region games.”

The Bulldogs darted out to a fast start on a cool Thursday night in West Knoxville. The Bulldogs took the opening kickoff and engineered a 10-play, 74-yard drive that was capped by a 2-yard scoring plunge by quarterback John Carvelato. Bearden added the extra point to make it 7-0 with 8 minutes, 19 seconds remaining in the first quarter.

That got the Bulldogs off to the races. Their defense forced the Hawks (0-7, 0-2) to punt on their inaugural two possessions.

Meanwhile, Bearden scored on its second possession and Makai Williams made it 14-0 with a 37-yard touchdown scamper with 22 seconds left in the opening frame.

Williams closed out the first quarter by intercepting a pass from HVA’s Sam Simpson and returning it for a score on the final play of the opening frame.

Bearden extended its advantage to 24-0 when Jack Downey kicked a 19-yard field goal with just over four minutes to go in the second stanza.

Shinlever said that it was important for the Bulldogs to get off to the fast start.

“You always want to get off to a fast start,” he said. “I’m really proud of our kids and at times tonight, we proved that we could be a solid football team and they’ve really been working hard.”

HVA finally got on the scoreboard when Caleb Smith threw a 4-yard touchdown pass to Braden Schloff late in the second quarter. The Hawks, however, missed the extra point and the score remained 24-6.

Carlevato closed out the half by throwing a touchdown pass to Griffen Oros in the waning seconds of the second quarter.

Bearden continued to dominate after the break as Reed Frederick blocked a punt and Williams scored two more rushing touchdowns.

But the Hawks didn’t give up.

Simpson had two TD passes after halftime, both to wide receiver Ty Gentry.

“Our kids didn’t quit and we did some things tonight that can really help us get better,” Potter said.