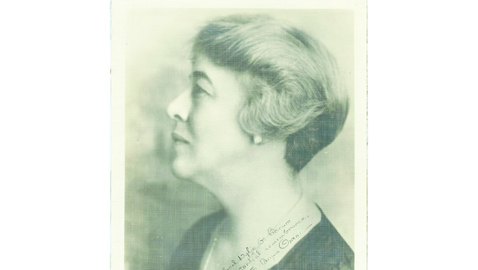 “Keep your eyes on the stars, and your feet on the ground.”

Ruth Bryan Owen lived a truly remarkable life; at various times she was an author, filmmaker, lecturer, diplomat and congresswoman. She was also the daughter of one of the most famous men of the age: William Jennings Bryan. W. J. Bryan, once known as the “silver tongued boy orator of the Platte”, had three times been the nominee of the Democratic Party for president.

Born October 2, 1885, Ruth was the first-born daughter to William Jennings Bryan and his wife, Mary. Blessed with both beauty and intelligence, Ruth did not suffer from a lack of self-esteem or confidence; at the age of five, she predicted she would be elected to Congress. W. J. Bryan had been elected to Congress and it was at that tender age Ruth first appeared on the floor of the House of Representatives. Speaker Thomas Reed noticed her and beckoned her to approach the Speaker’s rostrum. Ruth Bryan was soon happily sitting beside the Speaker.

Ruth Bryan had horrified her parents when she left the University of Nebraska to marry William Leavitt. Leavitt was seventeen years Ruth’s senior and earned his living a society painter. William Leavitt had been painting a portrait of William Jennings Bryan when Ruth first met and fell in love with him. Neither W. J. Bryan nor his wife approved of the match; both objected to the difference in age between the prospective bride and groom. Bryan was also unhappy his daughter left college to marry. Although unhappy and opposed to the marriage, Ruth’s parents put aside their forebodings and opened their home to the couple where they were married.

Ruth Bryan would have done well to heed her parents; the marriage was a disaster. Returning from a European honeymoon, the couple made a home in Newport, Rhode Island so Leavitt could continue painting. The marriage was troubled from the start and eventually William Leavitt left for Europe again, leaving Ruth and two children behind. Ruth Bryan sued for divorce and claimed her painter husband refused to support neither her nor their children. Reputedly, W. J. Bryan loathed the idea of his daughter being divorced, but accepted it. The two children, Bryan and Ruth, were the apples of William Jennings Bryan’s eyes and he positively doted on them. It was W. J. Bryan who won custody of the two children following Ruth’s divorce from William Leavitt. It was a bitterly fought custody case, which filled headlines across the country at the time.  Mother Ruth decided to study voice and departed for Europe where she met Major Reginald Owen in Germany. Owen was a British soldier who captivated Ruth and the two were married and the union produced another two children. Ruth may have been attracted to Major Owen as she had been a nurse during the World War and he had sustained injuries that led to his premature death a few years later.

Following Ruth’s remarriage, William Leavitt once again tried to regain custody of his two children with Ruth, but he found W. J. Bryan to be an unmovable object. Bryan retained custody of his grandchildren.

Ruth Bryan Owen lived largely abroad during the first years of her marriage to Major Owen, content to let her two older children be raised by her own parents. Bryan would change his name and become an actor and appeared in several Hollywood movies before dying in New York City under odd circumstances in 1943. Eventually, Bryan’s death would be deemed a suicide.

His sister Ruth would go onto to marry Robert Lehman, one of the heirs to the Lehman Brothers fortune. By the time he died in 1969, Robert Lehman would be one of the wealthiest men in the country.

Ruth spent three years in Jamaica where she built a magnificent home in Oracabessa. Christened “Golden Clouds”, the house sat on six acres of gardens and had eleven bedrooms. Golden Clouds had its own private beach and Ruth Bryan Owen entertained movie stars such as Charlie Chaplin and Clark Gable and Gable’s wife Carole Lombard. Ruth Bryan Owen became a prolific author and penned a book about her very own slice of paradise in 1949, entitled Caribbean Caravel. Altogether, Ruth Bryan Owen would write seven books on a wide range of topics, including exotic locales and public speaking. Considering her father was one of the most famous orators in American history, it is hardly surprising Mrs. Owen became a noted speaker in her own right. Whenever her funds were low, Ruth Bryan Owen would follow the same route which had earned her father a tidy fortune, touring the lecture circuit. Bryan had left the brutal Nebraska winters for the much warmer climate of Florida where he lived in the Villa Serena in Miami. Bryan had also invested much of his own money in Florida real estate.

Ruth Bryan Owen scripted a movie in the early 1920s, Once Upon A Time, which she also produced and directed. A lush production of a tale out of the Arabian Nights, the film has long since been lost. The film was financed from Mrs. Owen’s public speaking. It was yet another first, as Ruth Bryan Owen was one of the first female American filmmakers.

Ruth Owen’s successful career as a lecturer and speaker attracted the attention of the University of Miami, who invited her to join the faculty. Eventually, she became vice president of the university.

In 1926, Ruth Bryan Owen once again followed her father into elective politics. She became a candidate for the Democratic nomination for Congress in Florida’s Fourth District. She challenged incumbent William J. Sears, who had been in office for twelve years. The lines of the district are almost impossible to imagine today, running from Jacksonville down the east coast of Florida to the Miami Keys. St. Augustine, Miami and Orlando all lay within the confines of the Fourth Congressional District. After a hard fought campaign, she lost to Congressman Sears, albeit it only very narrowly. Two years later, Ruth Owen ran again and defeated Sears handily, winning with more than 57% of the vote. It was an impressive win over a veteran member of Congress.

The congresswoman-elect had yet another fight to win before she could claim her seat in Congress. Her election was challenged on a rather obscure law. Opponents to seating Ruth Bryan Owen claimed she was not a citizen of the United States as she had married an “alien” when she wed a subject of the British Empire. Under the law, she was allowed to petition for her American citizenship to be returned to her, which she had done in 1925, but it was under the seven years required by the Constitution. Mrs. Owen spoke on her own behalf and made the logical claim that her citizenship had been lost not because of her having married a British citizen, but solely because of her gender. Ruth Bryan Owen pointed out no male had ever similarly lost his citizenship because of having married a foreigner. The congresswoman-elect was promptly seated by the House of Representatives.

William J. Sears resumed his law practice, but would make a comeback in 1932, when he won an At-Large seat in Congress from Florida. He was reelected in 1934, but finally defeated again in 1936.

Congresswoman Ruth Bryan Owen was reelected in 1930, but in 1932 faced a serious opponent in J. Mark Wilcox, a West Palm Beach lawyer who championed the repeal of prohibition. Mrs. Owen lost and it was the end of her congressional career. Always having maintained that it was wrong for “lame ducks” to serve in office, she resigned her own seat in the U. S. House of Representatives on December 1, 1932. Following her resignation, Mrs. Owen spoke before a luncheon in Washington, D. C. where she jokingly gave the “Last Will and Testament of a Lame Duck”, which was a clever poem which began, “To the members of the coming session we leave what’s left of the depression.”

Mrs. Owen’s talk was a great success and Congresswoman Florence Kahn of California insisted upon inserting her remarks and poem into the Official Record of the House of Representatives, while Senator Hattie W. Caraway of Arkansas did the same in the U. S. Senate.

Mrs. Owen had at first protested, but Congresswoman Kahn dismissed her objections, saying, “Oh, give the boys a good time before you go. They’ll wish they had been smart enough to think of it!”

Mrs. Owen was not out of office long, as she was tapped by President Franklin D. Roosevelt to serve as the Ambassador of the United States to Denmark. By that time, the forty-seven year old Mrs. Owen was a glamorous grandmother. She was still a very striking woman, tall, always impeccably and stylishly dressed, with piercing eyes.

Ruth Bryan Owen proved to be an excellent emissary for her country and won the affection and respect of the Danish people. Apparently, Mrs. Owen also found time for personal socializing, as she met Major Borge Rohde, eight years her junior. Major Rohde was a gentleman-in-waiting to Frederick, King of the Danes.

Major Rohde and Ruth Owen were married in 1936 and through her marriage, she possessed dual citizenship as an American and a Dane. Ruth Bryan Owen and her husband were married in Hyde Park and boasted the most famous guest and host possible: President Franklin D. Roosevelt.

Ruth Bryan Rohde lived a comfortable life, shuttling back and forth between Denmark and New York, where she maintained a home. She and Major Rohde also bought an estate in West Virginia, but later sold it. Ruth Bryan Rohde also kept a hand in politics and was a member of the U. S. delegation to the San Francisco Conference, which was the prelude to the United Nations. President Harry Truman appointed Ruth Rohde to serve as an alternate for the United States to the United Nations General Assembly in 1948.

Ruth Bryan Owen experienced more than most in her lifetime. While never eclipsing her famous father, she carved out a career of her own, which was an exceptional achievement for a woman in her time. Ruth Bryan Owen traveled extensively, not just in the United States, but also across the globe. Ruth Owen visited places that were mere spots on a map for most Americans, traveling through much of Asia, as well as living in several different European countries.

Ruth Bryan Owen was a modern woman long before people knew there was such a thing. Ruth Bryan Owen certainly always kept her eyes on the stars, even though her feet oftentimes never touched the ground.