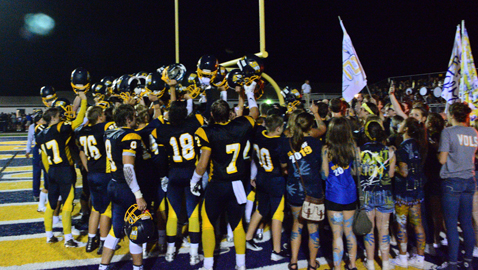 If the rest of this season is anything like the start, Seymour High football fans may be calling the Eagles’ No. 5 Austin Bruiser on Friday nights.

Seymour’s public address announcer, Charlie Householder, was so impressed by Austin Brewster’s first game performance, he honored him in the second half by putting special emphasis on the senior running back’s last name … “Bruuuuuuster on the carry.”

It’s sure to catch on, if Brewster keeps piling up the rushing yardage as he did in the Eagles’ 42-27 win over The King’s Academy Friday night at Benton Householder Stadium.

The 5-10, 195-pound workhorse carried the ball 38 times for 253 yards and two touchdowns to lead Seymour past the Lions in the second meeting ever in football between the two schools, which are separated only by Boyds Creek Highway and easily within walking distance of each other.

Householder even emphasized the close proximity in his pre-game introduction to the crowd on hand – “From just across the hill, The King’s Academy Lions are in the house! … to take on your very own Seymour Eagles!”

After this season’s game, Seymour Athletic Director Gary Householder said the series between the two schools would probably not continue.

Seymour Coach Jerry Cooper was pleased with his offense’s zero turnovers and explosive plays on an opening night.

“I want to give credit to our three senior backs,” he said. “Brewster was the difference in the game. Those yards come because we have good linemen in front of him. Let’s not forget the four senior linemen up front.”

Seymour showed it could drive the ball too, answering with a 77-yard march in 13 plays. Brewster powered in from the 1 and the Eagles led 14-7 with 22.5 seconds left in the quarter.

The slippery Sellers returned the ensuing kickoff 46 yards to the Seymour 44. However, a first-down fumble on the exchange between quarterback Brandon Burgess and Sellers was gobbled up by the Eagles’ Issac Miller.

Blythe recovered a fumble to keep a Seymour drive alive and on the next play senior Jacob Pierce ran a speed out route to the side and quarterback Tyler Cooper hit him for a 23-yard TD pass play as the Eagles took a 21-7 lead with 8:24 showing on the second quarter clock.

The King’s Academy struck back quickly as Sellers scored on an 86-yard kickoff return, cutting the deficit to 21-14. Sellers avoided the initial wave of defenders, found a lane and couldn’t be caught.

Brewster carried the ball seven straight times to take Seymour 62 yards and its fourth TD. He started with back-to-back 14-yard rushes, showing his determination as he broke tackles on the second big gain. He tallied from the 2 and it was 28-14.

Isaiah Jeffers returned the ensuing kickoff 53 yards to the Seymour 27, but the Lions couldn’t capitalize on the good field position. A snap over the quarterback’s head lost seven yards. A hard hit by Pierce prevented wide receiver Jake Weekly from making a catch on second down. Shimomura tried to salvage a 38-yard field goal but missed wide left.

TKA threatened in the final minute before intermission, but a pass by Burgess was picked off by Farmer at the 2.

At the start of the second half, the Lions, taking advantage of two major Seymour penalties, had a second-and-goal at the 1. Sellers had the ball knocked out of his possession on his next carry, however, and the Eagles’ Brandon Parrott came up with it at the 4. It was a huge turnover.

Seymour’s offense went 96 yards in 16 plays and took all but 57 seconds off the third quarter clock to open up a 35-14 lead. After Brewster had carried the ball seven plays in a row, Farmer darted his way into the end zone from seven yards out.

The Lions were still alive, but Pierce took a pitch right 63 yards to the house, escaping a final potential tackler around the 15-yard line. His big play extended the lead once again to 21 points (42-21).

“Congratulations to Seymour,” said Matt Lowe, The King’s Academy coach. “They did everything they needed to do to win the ball game. I’m extremely proud of our effort. We made too many mistakes and turnovers and couldn’t get off the field defensively. Those are things we’ve got to improve on, if we want to win close ball games.”