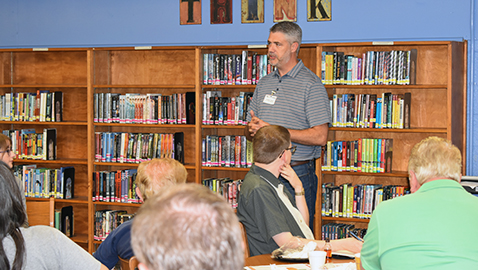 This month’s North Knoxville Business & Professional Association meeting agenda veered from the usual to the exceptional as it highlighted eleven non-profit agencies. Each representative or NKBPA member gave a three-minute synopsis of their organization’s mission, current needs, and upcoming fundraisers. It was an excellent way to spur on members to volunteer by learning about service opportunities in the community.

NKBPA President George Bove kicked off the announcements with a special thanks to Tyler Pavlis who provided breakfast from Cracker Barrel for the “Nonprofit July” meeting.  Held at Whittle Springs Middle School for the first time, the meeting included the president introducing Liz Thacker of Great Schools Partnership who in turn introduced Whittle Springs M.S. Principal Joann Bost. As a graduate of Whittle Springs M.S. herself, Bost boasted of serving “the best little middle school in Knox County.” “It’s very important to us … being in the heart of this community … that you know where we are and that you are with us this morning,” she shared while gladly hosting the association members and guests in the school library.

NKBPA board member Carla Mounger announced the Uptown North Broadway Bash scheduled for Saturday, July 27 from noon until 4 p.m. at the Broadway Shopping Center. Festivities will include live music, food trucks, a local artisans’ bazaar, and kids’ activities like the Safety City Fire House, inflatable slides, and free bicycle helmets to be provided by the Epilepsy Foundation of East Tennessee.

One lesser known non-profit organization named Care Cuts was founded by local barber Marti Baker in April 2016. “I started under the bridge with Maxine Raines feeding the homeless, and I wanted to do more, and so I wanted to cut their hair.” Having cut hair in Tennessee for 38 years, her desire was to restore dignity to the homeless population in Knoxville and give them hope.

“Care Cuts was the missing piece between the Salvation Army, KARM, and VMC. Yes, they do have showers … but we get these folks who are not in housing, who are not on the housing list, … we build them up so they will go into VMC, so they will go into KARM and get out of harm’s way,” she explained. The first Sunday of every month any homeless person can come to GEO Hair Lab to receive a free haircut, meal, clothes, and care. “We are called to do this,” she added, speaking how the community needs to give back because Knox Area Rescue Mission (KARM), Volunteer Ministry Center (VMC), and government agencies are already overburdened with their own workloads to help the homeless.

Another less familiar group, Fulton High School Alumni Association, was represented by Alumnus Ronnie Collins. He spoke about creating a Veterans memorial to honor seven students of Fulton H.S. who served in the Vietnam War and were killed. Collins added that fundraising efforts are underway for this dedication.

Shelly Woodrick of CAC Mobile Meals shared two recent initiatives to help those seniors who are 60-years-old or older and unable to provide meals for themselves. “More than a Meal,” a roll-out app, is underway for volunteers to receive mapping capabilities and a direct line of communication with a senior’s emergency contact person if needed. Another program called “Farm to Senior Table,” works in partnership with Beardsley Community Farm to harvest, prepare, and cook vegetables to be used for the more than 900 seniors who receive meals daily.

Once the talks of agencies doing the community much good concluded, President Bove introduced guests and encouraged all members to involve themselves in volunteering their time and talents.

To learn more about this organization or its upcoming event, visit the North Knoxville Business & Professional Association Facebook page, or www.northknoxvillebpa.org/broadway-bash/