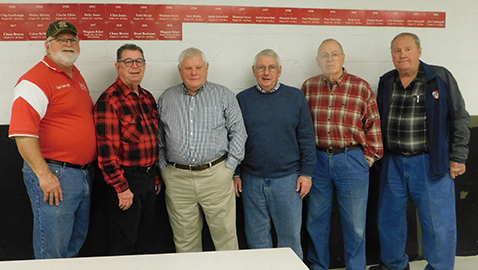 The Chris Vandergriff Halls Invitational wrestling tournament has long been a January staple in the Tennessee high school wrestling world.

It has traditionally hosted some of the best teams and athletes from points throughout the Southeast. But it also served as a reunion of sorts and 2019 was no exception.

Before wrestling started on Saturday, Jan. 19, the tournament, long known simply as the Halls Invitational, became named for Vandergriff, a football player and heavyweight state champion for the Red Devils.

At the 2019 tournament, Vandergriff was reunited with some of those who mentored him and one longtime rival.

Former Halls coaches Ed Simmons and Dave Wayland showed up at the tournament, along with longtime official Clint Abbott, who has been involved in wrestling for more than half a century, Don Elia, who has been a college coach at Maryville, Carson-Newman and East Tennessee State, and Gary Walker, who started Carter High’s wrestling program back when the Hornets and the Red Devils had Knox County’s only two high school wrestling programs.

Despite being wrestling coaches, Wayland and Walker never competed in the sport in high school.

But both developed a passion for the sport after coaching and playing football.

“I became an assistant [wrestling coach] at [Tennessee Military Institute],” Walker said. “I came to like it so much that I grew to like it more than I liked coaching football.

“We got wrestling started at TMI and I was an assistant coach under my friend, Meredith Gibson in 1966 and 1967. When I was at TMI, Holston [High School] had a program. But when I left TMI, and came to Carter, Holston had dropped the program.”

Walker was Carter’s coach from 1971-1983. After he left Strawberry Plains, the Hornets dropped their program. It has since been reinstated. Tim Free, who wrestled on Carter’s last team in the 1980s, is now its coach.

The now retired Walker and Simmons remember the early days of wrestling in Knox County.

Simmons, who coached Vandergriff and current Powell coach Larry Neely during their days as student athletes in Halls, said finding matches in those days was tough.

“We used to have to go about 50 miles to get a match,” said Simmons, who taught math at Halls. “I started the team in 1968, and that’s been 51 years ago. I just always enjoyed it because it was an individual sport.

Walker remembers taking his teams to Chattanooga to compete.

“I took my kids to Baylor and McCallie because they had programs,” he said.

He also credits two sportswriters for helping the sport grow in Knoxville. The two writers are the late Nick Gates (from the Knoxville News-Sentinel) and current Knoxville Focus contributor Steve Williams, who was once prep editor at the Knoxville Journal.

“We had two sportswriters, Nick Gates and Steve Williams, who helped wrestling grow,” Walker said. “They were always there to get the word out for us.”

Abbott, a Blount County man through and through, wrestled at Maryville College. He was also a football and baseball player in high school.

He started as an official when he was still in college because Maryville College couldn’t find referees for its matches. He officiated Tennessee’s first state tournament in 1968 and remains a supervisor of officials today.

Wayland inherited the Halls wrestling program when Simmons stepped down. He was head coach from 1978-82 and kept the program until Vandergriff, his former assistant got tenured by Knox County Schools.

“I was the head coach here and Chris was my assistant,” Wayland said. “But Chris knew a whole lot more about wrestling than I did. So I stayed on until he was able to get tenure, then I stepped down and became his assistant.

Elia, now retired, serves as a consultant to Morristown East, which was in the most recent Halls tournament.

He coached college wrestling in Tennessee until 2016. The New Jersey native began wrestling in the Northeast when he was eight years old.

“When I retired from coaching in 2016, it was the first time that I hadn’t been a coach or involved in wrestling since I was eight years old,” Elia said. “I’ve been helping in Morristown for the last two years.

“I’m at East this year and I worked at West last year.”

Elia began wrestling after he was cut from a youth basketball team.

“When I was eight years old, I went out for basketball and the coach called over and told me that I had no future,” Elia said. “He suggested that I try wrestling.”